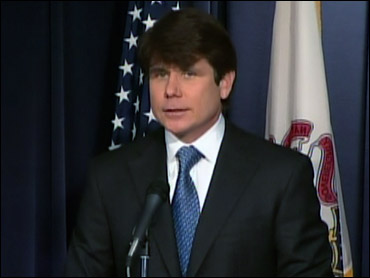 The House could vote as early as Friday on whether to make Blagojevich the first governor impeached in the long, sordid history of Illinois politics. Impeachment in the House would trigger a Senate trial to decide whether the second-term Democrat should be removed from office.

Many on the 21-member special committee called it a sad day for Illinois, but Rep. Bill Black disagreed.

"I think this is a good, glad, happy day for Illinois because it points out that nobody is above the law," said Black, a Republican. "There have been egregious abuses if half of what we read is true."

Blagojevich has denied any wrongdoing. Spokesman Lucio Guerrero didn't immediately comment on the impeachment recommendation, but said there was no chance the governor would resign before the full House decision. Blagojevich's attorneys left the hearing before the committee vote.

"The citizens of this state must have confidence that their governor will faithfully serve the people and put their interests before his own," the committee report said. "It is with profound regret that the committee finds that our current governor has not done so."

Blagojevich was arrested Dec. 9 on federal charges that include allegations he schemed to profit from his power to name President-elect Barack Obama's replacement in the Senate.

He later appointed Roland Burris to fill the Senate seat, and Burris testified Thursday that he did not make a deal with the governor to win the plum position.

While the governor maintains his innocence, the report notes he did not appear before the committee to explain himself. "The committee is entitled to balance his complete silence against sworn testimony from a federal agent," it says.

The committee's report recounts the federal charges, relying on a sworn affidavit from an FBI agent describing tape-recorded conversations in which Blagojevich discussed using the seat to land a job for himself or his wife. The governor also is quoted on the need to hide any evidence of a trade-off.

"The committee believes that this information is sufficiently credible to demonstrate an abuse of office of the highest magnitude," the report says.

It also lays out allegations separate from the criminal charges - that Blagojevich expanded a health care program without proper authority, that he circumvented hiring laws to give jobs to political allies, that he spent millions of dollars on foreign flu vaccine that he knew wasn't needed and couldn't be brought into the country.