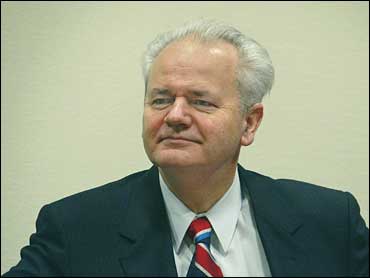 The trial had been scheduled to resume Monday after four previous delays, but a new medical report indicated Milosevic's blood pressure was still too high, court spokesman Jim Landale said.

"On the basis of the blood pressure values of the accused, (the doctor) advises he should not attend the hearing scheduled for Monday," Landale said. No additional details of the medical report were released.

Milosevic, 62, has been on trial since February 2002, facing 66 counts of war crimes for the Balkan wars of the 1990s. The trial has been severely set back by his heart trouble, exhaustion and bouts with flu. It was further delayed by the resignation in February of presiding judge Richard May due to health reasons. May died earlier this month.

His defense case was initially scheduled to begin on June 8.

Milosevic has been allotted four hours to present an opening statement, likely to span two court sessions. He will then be able to call witnesses and present evidence.

Milosevic wants to call 1,400 witnesses, including British Prime Minister Tony Blair and former President Bill Clinton. The judges will have to cut the witness list if Milosevic is to complete his presentation within the 150 days allowed by the court.

The International Criminal Tribunal for the former Yugoslavia will be closed for a regular summer recess from Aug. 2-Aug. 20.

Judges are considering forcing Milosevic to take a defense lawyer to lighten his workload and speed up the landmark trial. They ordered Milosevic to undergo a full medical examination to determine if he is healthy enough to represent himself and fit to stand trial at all.

According to a medical report detailed in court on July 5, Milosevic has suffered "organ damage" due to high blood pressure, including "hypertrophy of the left ventricle," meaning an enlargement of the main pumping chamber of the heart.

At times of stress, Milosevic's blood pressure rises to 200/130, and falls to around 140/80 when he is relaxed. The first number reflects blood pressure as the heart beats, the second is the pressure between beats. A normal reading is 120/80 or less.

He is accused of, "the extermination or murder of hundreds of Croat and other non-Serb civilians, including women and elderly persons" in Croatia.

In Kosovo, prosecutors allege that Milosevic "planned, instigated, ordered, committed or otherwise aided and abetted in a deliberate and widespread or systematic campaign of terror and violence."

"Kosovo Albanians were frequently intimidated, assaulted or killed in public view to enforce the departure of their families and neighbors," the indictment reads. "Many Kosovo Albanians who were not directly forcibly expelled from their communities fled as a result of the climate of terror created by the widespread or systematic beatings, harassment, sexual assaults, unlawful arrests, killings, shelling and looting carried out across the province."