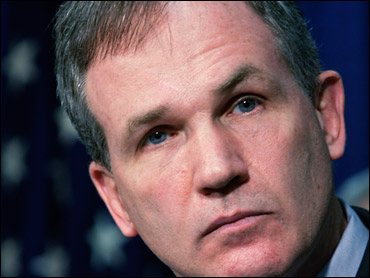 No governor in the nation had more reason to watch his back than Rod Blagojevich.

Illinois' chief executive had known for at least three years he was under federal investigation for alleged hiring fraud, and a campaign fundraiser caught in prosecutors' net was talking.

But authorities say that when a coveted political prize fell in his lap, the Democrat could not resist the urge to brazenly exploit it with an eye on reviving his moribund career.

Trusted with the job of appointing President-elect Barack Obama's successor in the U.S. Senate, the governor conspired to sell or trade the office to the highest bidder, federal prosecutors allege.

"I've got this thing and it's (expletive) golden," he allegedly said in a wiretapped conversation, "and I'm just not giving it up for (expletive) nothing. I'm not gonna do it."

That wasn't all: Prosecutors say he also doled out jobs, contracts and appointments in return for campaign contributions, and tried to strong-arm a newspaper owner into firing editorial writers who had criticized him.

"We were in the middle of a corruption crime spree, and we wanted to stop it," U.S. Attorney Patrick Fitzgerald said after Blagojevich was arrested Tuesday. The prosecutor said the governor reached "a truly new low" and added: "The conduct would make Lincoln roll over in his grave."

Some observers said the scandal reveals the governor's hubris.

"I actually think he thinks he was invulnerable," Lynn Sweet of the Chicago Sun-Times said on The Early Show. "That he could just go forth and do this. That's kind of the - that's the Chicago way. You walk up to the line … And sometimes the guys just don't know where the line is."

Obama was not involved, according to prosecutors and to Blagojevich himself, whom they overheard complaining that Obama's people are "not going to give me anything except appreciation."

"I don't think, though, that you can fairly say that Barack Obama and Rod Blagojevich were anything but the most distant allies," said Mike Flannery, political reporter for CBS station WBBM in Chicago.

But that's not stopping the Republican National Committee from trying to tie the two men together, reports Reid.

"Given the president-elect's history of supporting and advising Gov. Blagojevich, he has a responsibility to speak out and fully address the issue," said RNC chairman Mike Duncan in a statement.

Another alleged scheme was that Blagojevich would possibly rescind an $8 million commitment of state funds to Children's Memorial Hospital in Chicago after a $50,000 donation from its chief officer did not materialize, reports CBS News correspondent Dean Reynolds.

Read The Criminal Complaint Against Blagojevich

Statement From The Department Of Justice

Blagojevich's approval rating among voters had been an abysmal 13 percent, but amazingly, court papers show that he talked about rehabilitating his image by appointing himself to the Senate seat. Prosecutors allege he said he would have access to greater resources if he were indicted while in the Senate, and that he even discussed a presidential run in 2016.

Top Illinois lawmakers said Tuesday that they are preparing to call the Legislature into session as early as next week to set a special election, hoping to avert the possibility of their embattled governor picking the state's next U.S. senator.

Federal investigators had bugged the governor's campaign offices and tapped his home phone, capturing conversations laced with profanity and tough-guy talk from the governor. Chicago FBI chief Robert Grant said even seasoned investigators were stunned by what they heard, particularly because the governor had known he was under investigation and clearly realized agents might be listening in.

The FBI said in court papers that the governor was overheard conspiring to sell the Senate seat for campaign cash or lucrative jobs for himself or his wife, Patti, a real estate agent. He spoke of using the Senate appointment to land a job with a nonprofit foundation or a union-affiliated group, and even held out hope of getting appointed as Mr. Obama's secretary of health and human services or an ambassador.

According to court papers, the governor tried to make it known through emissaries, including union officials and fundraisers, that the seat could be had for the right price. Blagojevich allegedly had a salary in mind - $250,000 to $300,000 a year - and spoke of collecting half-million and million-dollar political contributions.

Blagojevich also considered appointing himself to the Senate seat, telling his deputy governor that if "they're not going to offer me anything of value, I might as well take it," prosecutors said.

The governor's spokesman had no immediate comment on the charges, but the governor has repeatedly denied any wrongdoing. As recently as Monday, he told reporters: "I don't care whether you tape me privately or publicly. I can tell you that whatever I say is always lawful."

The charges do not identify by name any of the political figures under consideration for the Senate seat, referring to them only as "Candidate 1," "Candidate 2," and so on. However, those that have been considered for the post include: Obama confidante Valerie Jarrett, Reps. Jesse Jackson Jr., Danny Davis, Jan Schakowsky and Luis Gutierrez; Illinois Senate President Emil Jones; and Illinois Department of Veterans Affairs Director Tammy Duckworth.

Fitzgerald did not address whether any of the potential Senate candidates crossed the line themselves and could face charges. And it was unclear from court papers whether the governor or his aides spoke directly to the candidates.

Blagojevich was charged with conspiracy to commit fraud, which carries a maximum penalty of 20 years in prison, and solicitation to commit bribery, which is punishable by up 10 years. He was released on his own recognizance following an afternoon hearing.

The governor's attorney, Sheldon Sorosky, said after the hearing he didn't know of any immediate plans for Blagojevich to resign. The governor believes he didn't do anything wrong and asks Illinoisans to have faith in him, Sorosky said.

"I suppose we will have to go to trial," Sorosky said.

The government alleges that Blagojevich, a former congressman, state lawmaker and prosecutor, illegally threatened to withhold state assistance to Tribune Co., owner of the Chicago Tribune, in an attempt to strong-arm the newspaper into firing editorial writers who had criticized him.

In addition, the governor was accused of engaging in pay-to-play politics - that is, doling out jobs, contracts and appointments in return for campaign contributions.

Blagojevich becomes the latest in a long line of Illinois governors to become engulfed in scandal. He was elected in 2002 as a reformer promising to clean up after Gov. George Ryan, who is serving six years in prison for graft.

The scandal leaves the Senate seat in limbo. Illinois legislative leaders said they were preparing to quickly schedule a special election to fill Mr. Obama's seat rather than let Blagojevich pick someone.

"No appointment by this governor, under these circumstances, could produce a credible replacement," said Democratic U.S. Sen. Dick Durbin of Illinois.

Some Illinois politicians immediately demanded that the governor step down or face impeachment.

Also arrested was Blagojevich's chief of staff, 46-year-old John Harris, who was accused of taking part in the schemes to enrich the governor.

In court papers, the FBI said Blagojevich expressed frustration at being "stuck" as governor. "I want to make money," the governor, whose salary is $177,412, was quoted as saying in one conversation.

Prosecutors said he also talked about getting his wife placed on corporate boards where she might get $150,000 a year in director's fees.

The head of the FBI's office in Chicago said he phoned Blagojevich at 6 a.m., telling him of a warrant for his arrest and informing him there were two FBI agents at his door. Blagojevich's first comment was, "Is this a joke?" Grant said. The governor was led away in handcuffs.

Authorities said Blagojevich was hoping to raise $2.5 million by the end of the year and decided to speed up his "crime spree" before a state anti-corruption law takes effect Jan. 1. The governor had vetoed the law, but the Legislature overrode his veto.

The wiretapped conversations took place after Election Day and as recently as last week. On the recordings, Blagojevich warned one person not to use the phone and said, "The whole world is listening. You hear me?"

Political fundraiser Antoin "Tony" Rezko, who raised money for the campaigns of both Blagojevich and Obama, is awaiting sentencing after being convicted of fraud and other charges. Rezko, whose trial focused greatly on Blagojevich's administration but little on Obama, has spoken to federal investigators but his level of cooperation is unclear.

The court papers also outline Blagojevich conversations related to Tribune Co., which has been hoping for state aid in selling Wrigley Field, the home of the Chicago Cubs. Blagojevich was quoted as telling his chief of staff, Harris, in a profanity-laced Nov. 4 conversation that Tribune executives should fire the editorial writers "and get us some editorial support."

Harris was later overheard telling the governor on Nov. 11 that an unnamed Tribune owner, presumably CEO Sam Zell, "got the message and is very sensitive to the issue."