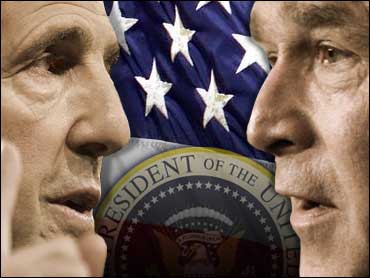 When John Kerry and President Bush take the stage Wednesday night for their final debate, viewers will see not only different candidates but different races as well.

One is a push to sway swing voters. The other is a drive to fire up the partisan base. Each reflects the way the campaigns have answered the crucial question: Are there any voters left who have not made up their minds?

Polls suggest there are few. In the most recent CBS News survey, only 5 percent are undecided, down from 9 percent four years ago. A USA Today/CNN/Gallup poll shows a mere 2 percent have yet to choose. Reuters/Zogby's latest has a larger 8.4 percent.

There is also uncertainty over how many of the thousands of newly registered voters will turn up at the polls.

Facing this ambiguous pool of voters who have not locked onto a candidate, the campaigns have adopted starkly different approaches.

"Bush has consistently had this strategy," Brookings Institute visiting fellow Michael McDonald said, of "red meat issues he keeps throwing to his base to really energize them to vote."

The Democrats, on the other hand, are still playing to the middle.

"The Kerry campaign seems to still be taking a more moderate stance and reaching out to moderate voters," McDonald added, noting Kerry still calls himself a "fiscal conservative."

The contrast is seen in recent speeches by the candidates and in their debate last week. Both men continue to attack one another, but Kerry emphasizes Mr. Bush's "wrong choices" on the war and tax cuts, while Mr. Bush is increasingly using the "liberal" label to describe his opponent.

"I have a very different philosophy than him," the president said of Kerry at a rally in Colorado on Monday. "I'm a compassionate conservative."

Rather than discussing ideology openly, Kerry trumpets a populist message, saying on Oct. 3 that "time and time again, this president has chosen the powerful and well-connected over hard-working middle class families."

This difference in approach is not a new development in this campaign. It goes back at least to the party conventions.

The Democratic platform took no position on the Iraq war, while the Republicans took strong stands on gay marriage and embryonic stem-cell research.

In Boston, Democratic keynote speaker Barack Obama stressed unity, with phrases like "We coach Little League in the blue states and have gay friends in the red states." The Republican keynoter — Democratic Sen. Zell Miller — lashed out at Kerry, war protesters and flag burners.

In their second debate last Friday, the contrast was again clear. Answering a question about embryonic stem-cell research, Kerry went to lengths to claim common ground with the questioner.

"You know, Elizabeth, I really respect your -- the feeling that's in your question. I understand it," Kerry said. "I know the morality that's prompting that question, and I respect it enormously."

The president, while saying he had striven for balance between research and ethics, made less of an effort to appeal to the other side.

"Embryonic stem-cell research requires the destruction of life to create a stem cell," he said.

Later, Kerry was asked about taxpayer funding for abortions. Before indicating he supported it, he again reached out to opponents.

"First of all, I cannot tell you how deeply I respect the belief about life and when it begins," he said. "I'm a Catholic, raised a Catholic. I was an altar boy."

For his part, Mr. Bush spoke directly to anti-abortion rights voters with reference to the "culture of life."

"I think it is a worthy goal in America to have every child protected by law and welcomed in life," the president said.

Polls usually indicate that many Americans stand at the center of the abortion debate that Kerry was targeting, favoring abortion under certain circumstances or with restrictions. The question, though, is whether any of those voters are still in play.

"'Liberal, liberal, liberal' didn't work when the Bush campaign spent $58 million early on in the year," said veteran Republican strategist Roger Stone. Now the Bush team is returning to a strategy that did not win them any additional voters, "ergo they must believe there are no undecided voters."

At the same time, Mr. Bush might be looking beyond the swing voters because if after being in office for four years he has yet to convince them, the chance of him winning them over in the next three weeks seems slim.

As the challenger, Kerry must believe he still has a shot at them.

"As the lesser known of the two candidates, the better he can become known, the better chance he has at getting your vote," Stone said. "Consequently, his campaign should be geared to the notion that there are voters out there who are undecided because they don't know John Kerry."

Kerry's campaign has also aped the earlier successful democrats Jimmy Carter and Bill Clinton by adopting a Southern flair — North Carolinian John Edwards on the ticket — and trying to shed the ideological weight of Democrats past like George McGovern and Michael Dukakis.

"I mean, seriously — labels don't mean anything," Kerry said in the second debate. "What means something is: Do you have a plan?"

The Democrats can also take comfort in the notion that "undecided" voters, rather than vanishing, might be multiplying. Brookings Institute research suggests that registrations are up in battleground states, meaning more new voters are coming to the fold.

"They tend to be more persuadable so you can make a very strong argument that you can pitch your message to this crowd because they're going to be the new group that's going to swing the election," McDonald said.

Indeed, notes McDonald, the idea that the corps of "undecided" voters is shrinking could be a media-generated myth: Reporters who've covered the campaign for months scoffing at the idea that people have yet to make up their minds.

Democrats have signed up large numbers of new voters in key states like Ohio. Republicans have boasted that this year they have mounted what The Washington Post called "one of the largest grass-roots organizations of any modern presidential campaign."

The crucial question, of course, is whether newly registered voters actually go to the polls. After all, notes Stone, "If you have to drag somebody to register, they're not highly motivated."
By Jarrett Murphy