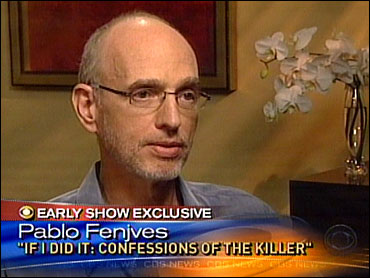 As former football star O.J. Simpson sits in jail awaiting arraignment on a host of robbery charges, his controversial book "If I Did It: The Confessions of the Killer" is climbing the best seller charts. Over the weekend, the book hit No. 1 on both Amazon.com and BarnesandNoble.com.

The book's ghost writer, Pablo Fenjves, remains convinced that Simpson is guilty of killing his ex-wife, Nicole Brown Simpson, and Ron Goldman in 1994. In fact, he was a witness for the prosecution during the trial. Simpson was acquitted of the murders.

"It was incredibly compelling," Fenjves told The Early Show co-anchor Julie Chen. "You know, to be given an opportunity to sit in a room with a man that, you know, I personally believed to be a murderer -- was just -- it was hard to not do it."

Fenjves spent days alone with Simpson working on a book project billed as Simpson's hypothetical confession to the murders of his ex-wife and Goldman. While working with Simpson, Fenjves did not hide his own sentiments about the murders.

Simpson went back and forth between being jovial and being distressed while Fenjves interviewed him about the murders. At one point, Fenjves said Simpson became quite upset.

And he said, " 'You know, I'm not gonna tell you that I, you know, you know, cut my wife's throat open and watched her eyes roll back in her head.' You know, words to that effect," Fenjves said.

Fenjves said that never throughout their time together he doubt Simpson's guilt. He remained as steadfast as he was when he testified against Simpson 12 years ago, coining one of the most memorable phrases of the trial: "plaintive wail" of a dog. Fenjves, Brown Simpson's neighbor, testified that he heard a dog crying by the two corpses. Simpson recognized Fenjves from the trial.

"He something like, 'You know, now, what is this business about a wailing dog?' He said, 'Have you ever heard of a man being put away on the testimony of a wailing dog?' " Fenjves said. "I think it was basically his way of telling me, 'I know who you are.' "

Even still, in the interviews, Simpson coughed up surprising details.

"He told me that when the Akita, the dog, came out of the house and saw Ron Goldman, the dog wagged his tail," Fenjves said. "And I thought, 'Wow. That's a very telling detail.' You know, to me, it suggested that the dog knew Ron Goldman. And he had been there before. And that's not the kind of detail one makes up."

"He talked about when he left the alley," Fenjves added. "And I had been under the impression that at the end of the alley, he had made a right to the corner of Bundy and Montana, and then made a left toward San Vicente. And he said, 'No, no. You know, why would I have made that right? I made a left.' And then he saw the look on my face, and he said, 'Well, that's the way I would've gone.' "

The book was first published in 2006 and was quickly pulled from publication after a public outcry led by Ron Goldman's father, Fred. But Goldman got his revenge and acquired the rights to the book and re-published it with his own title and comments.

Once the deal for Simpson to publish the book fell through, Fenjves says Simpson tried to distance himself from the project and accused the author of inventing parts of the story, but Fenjves said Simpson read the manuscript three times and signed off on it before it went to print.

"I think what Fred Goldman said on 'Oprah' was, was really dead on," Fenjves said. "He said, basically, 'If one woman in an abusive relationship reads this book and gets out, it will have been worth it.' And I 100 percent agree with him."

For Fenjves, this latest Simpson news is simply too coincidental. He doesn't seem to have changed since the trial of the century.

"My feeling is that -- that this whole thing with the book and -- and -- and O.J. losing the book and the Goldmans taking over the book and really sort of sticking it to him, I think it really affected him," Fenjves said. But his behavior has been sort of remarkably similar to the last time, you know? The cops come. They put him in cuffs. He smiles his O.J. smile. He's friendly. 'I've got nothing to hide.' So I found the whole thing bizarre. It's as, you know, he hasn't learned anything from history."

Georgia's secretary of state encourages early voting ahead of election

Some of the country's largest employers have expanded paid time-off policies for Election Day, but Amazon has not.

1 in 4 U.S. workers are considering quitting

Some companies have increased benefits in the COVID-19 era but many workers say that's not the case for their employers.

Writer details a year undercover on the white supremacist web

In the book "Cultural Warlords: My Journey Into the Dark Web of White Supremacy," writer Talia Lavin chronicles firsthand how white supremacists talk, act and even date amongst each other online.

The president blasted the nation's top infectious diseases expert in a campaign call and said if the White House had listened to Fauci, the U.S. would have 700,000 to 800,000 deaths.

The Supreme Court will likely hear the two cases in 2021, though a change in presidential administrations could render the disputes moot.