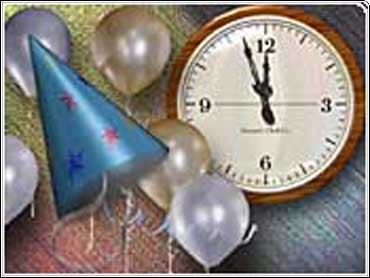 It takes guts to declare your New Year's resolutions on national television, but The Early Show family was equal to the task.

Anchor Bryant Gumbel even was able to report that he has kept a resolution he made six years ago: To write at least one note in longhand every single day. He says he writes to a variety of people, whether it's to say "congratulations," "thank you," "wishing you well," or "get well soon."

After conferring with her sister, says Co-Anchor Jane Clayson, she has decided to try to stop eating off other people's plates when they go out to dinner together. "I'm constantly eating what everybody else is eating," she adds.

She also wants to start taking vitamins more regularly and to do something adventurous to challenge herself physically, like whitewater rafting on the Snake River.

On the other hand, Weather and Entertainment Reporter Mark McEwen quips that the most he will promise to do is to watch a video of people going down the Snake River, although he seriously says that he wants adopt a healthier lifestyle and to get in better shape.

National Correspondent Jon Frankel has a laundry list of resolutions. "In this coming year," he says, "I would like to spend less and learn more. That's learn with an 'L.' I'd like to enjoy the journey of life a little more than I have over the last couple of years. I'd like to be more generous. I'd like to work harder at the relationships with the people that are most important to me, including my friends, family and, of course, my little niece, (Julia), who is a month old."