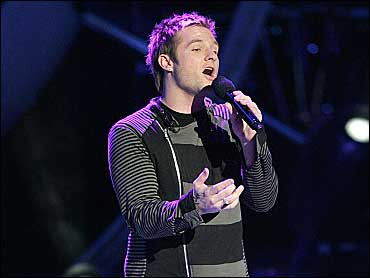 Looks and personality sometimes trump talent on "American Idol," but it's a lot harder to fake it in the show's new competition: songwriting.

Aspiring songwriters are being encouraged to submit entries through the Web at songwriter.americanidol.com from now until April 17 for a chance to have their song performed on the show's season finale.

Each contestant is allowed to submit only one song, which must be accompanied by a $10 entry fee.

Executive producer Simon Fuller and his 19 Entertainment A&R staff will select the top 20 songs from the entries. Beginning on May 2, fans will be able to go online, listen to and vote for their favorites.

"Having an undiscovered songwriter create the winner's single seemed like a natural next step for our show," Fuller said in a statement Wednesday.

The winning songwriter will also get a co-publishing deal with 19 Entertainment, as well as a $10,000 cash advance on royalties.

Many "American Idol" winners and finalists have been signed to management deals with 19 Entertainment. Although exact details of the contracts are kept confidential, Fuller reportedly gets 25 to 50 percent of their earnings — much higher than the industry average.

But, Fuller believes that as creator of "American Idol" he deserves the higher percentage. "My deals are the best in the world," he told CNN in 2004.

The pubishing deal that's part of the "American Idol" songwriting contest appears to be more standard, an industry expert tells The Showbuzz.

"I think it's actually quite fair given the market conditions and the opportunity being given to a songwriter," says Ivan Alvarez, a former Universal Music Publishing senior executive who now has his own consulting practice. "The only thing it does not have is a 'synch fee' for the performance of the song on the program. That alone could more than recoup the advance depending on the rights granted."

According to the "Idol" Web site, judges are looking for a song that's two and a half to four minutes long with broad appeal that is not tailored to any one singer.

Because the winning song is chosen based on votes by the public, it could fall victim to the pranksters at VoteForTheWorst.com. The Web site encourages people to vote for the show's worst singers which, according to them, is currently Sanjaya Malakar.

"I think there are definitely some Worsters writing their own songs for the competition, and you can rest assured we will definitely be voting for the worst song as well," the site's creator, Dave Della Terza, tells The Showbuzz. "If Sanjaya makes the finale, he can sing it as a true VFTW victory, and if he doesn't, some other poor sap can sing the terrible song and curse us, ha!"