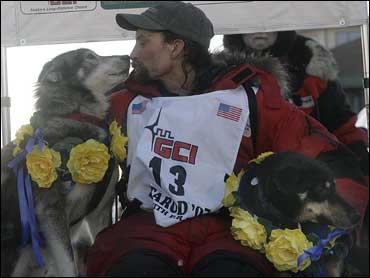 Sitting with two of his dogs on the winner's platform on Front Street in Nome, Lance Mackey savored his first Iditarod Trail Sled Dog Race victory.

His win Tuesday in the 1,100-mile Iditarod came just days after using a majority of the same dogs in winning the 1,000-mile Yukon Quest International Sled Dog Race.

"This is a damn dream that I've been living, you know, dreaming about since I was a little, little boy when my Dad won this race," Mackey, 36, said.

Mackey got his dream early Tuesday evening, crossing under the burled arch in downtown Nome early, completing the Iditarod in 9 days, 5 hours, 8 minutes.

"It's an incredible moment!" he said.

But Tuesday night, the down-to-earth musher planned a little whiskey for his own rest and relaxation and to celebrate the feat with his family, including father, Dick, and brother, Rick, both past Iditarod champions.

He had good reason to sit back and relish being the first musher to win both races in the same year: even he doubts he'll do it again.

"Yeah, I'd love to come back and repeat that performance but I'm really realistic here. Once in a lifetime is probably a rare opportunity," he said while one of the dogs licked some of the frost off his goatee.

He acknowledged that his dogs were a one-of-a-kind team, but next year, they will be older.

"I owe it to them. I think I'm smart enough to know when enough is enough, to back off a little bit. They're in their prime, they proved that. So I think it's time for a little R&R," he said.

Paul Gebhardt, 50, who was third last year, finished second in this year's race.

"He is a very driven dog driver," Gebhardt said of Mackey. "You got to admit, he's like the Dale Earnhardt of dog racing."

About a thousand fans braved subzero temperature to cheer Mackey to the finish. He lived the moment, slapping high-fives with fans as his dogs led him down the last block, sometimes jumping off the sled and running with them until his family mobbed him at the end.

"Dreams do come true, Mama, they do," Mackey said, fighting back tears.

"This is my passion," he said, adding he was proud to follow in his father's footsteps and joked about being thankful his father was a musher and not a lawyer.

"It's our lifestyle, it's something we breathe, eat and sleep," he said of the Mackey family's love of mushing. "This is what we do.

On Feb. 20, Mackey won his third consecutive Yukon Quest, which is run between Fairbanks, Alaska, and Whitehorse, Yukon.

With only 12 days rest, Mackey took 13 of his 16 dogs from the Yukon Quest to Willow for the March 4 official start of the Iditarod. In the two races, the dog team covered a distance equivalent to mushing from Boston to Salt Lake City.

Mackey's father, Dick, and brother, Rick, both won the race wearing bib No. 13, and each did so in the sixth time they ran the Iditarod. Lance Mackey camped out for days at the Iditarod headquarters last June to be the first person to sign up for this year's race — also his sixth — to select the No. 13 bib.

"I didn't know exactly what this bib was going to do for me, but what an honor," said Mackey. "This is the most cherished piece of memorabilia I'll ever own."

Many mushers have long believed it would not be possible to win both races in the same year with the same dogs because the animals would need more time to recover from one grueling race before launching off on another. But Mackey said he wasn't pushed much in the Yukon Quest, and it served as a good mental and physical training run for the dogs.

"I kept saying I want to be the one to prove that wrong. For those who don't believe it can be done, I thrive on underestimation. Don't ever doubt that I can't do something, I lived through cancer," he said.

Canadian Hans Gatt, 49, a three-time Quest winner who was also runner-up to Mackey twice, said Mackey's team was the best-looking on the Iditarod trail this year. Instead of tiring, his team recovered faster than any of the others after long runs between checkpoints, and maintained their speed.

"I can't run my dogs like that," Gatt said Tuesday, almost 100 miles back on the trail. "He obviously has figured out something we have not figured out yet."

Sled dog racing is a sport where mushers perform more for glory than big-time payouts, having to rely heavily on sponsorships to continue feeding their dogs.

Mackey had been thinking about that truck along the trail and for good reason. One year, when he was trying to get to the start of the Quest, he was fined $500 for missing a meeting for mushers. The reason he was late was that the two trucks he was driving broke down. One lost an engine and the transmission went out in the other.

Just before this year's race, he splurged on a used, 14-year-old pickup.

Thrusting both arms high in the air, he yelled out an elongated, "Yeah! Oh, the truck!"

He plans to paint the truck, but not sure yet what color would look best with his dogs in it. "They're going to look good in silver, black, blue, I don't care if it's hot pink, I'd be proud to drive it."

Mackey, who has named his kennel Lance Mackey's Comeback Kennel, was diagnosed with neck cancer in 2001 and underwent surgery and radiation.

With a feeding tube into his stomach and still undergoing cancer treatment, Mackey started the 2002 Iditarod, but was forced to scratch in Ophir more than 400 miles from Anchorage. Mackey now is cancer-free.

This year's Iditarod has been marked by poor trail conditions, causing an inordinate numbers of mushers — 21 — to scratch. One musher also took a wrong trail, prompting a search, and one dog died during the race.