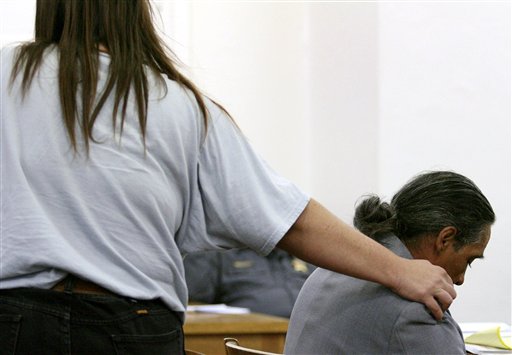 An Idaho man who let his 11-year-old daughter walk several miles in freezing conditions along an isolated rural highway on Christmas Day was acquitted Friday of involuntary manslaughter in the girl's death from hypothermia.

Robert Aragon was also found not guilty of felony injury to a child after the jury of seven women and five men deliberated for about two hours.

Aragon declined to comment after he left the courtroom with family members including his adult daughter, Teressa, who sat with the children's' mother and cried as the court clerk read the verdict.

Aragon was accused of letting his 11-year-old daughter, Sage, and his 12-year-old son, Bear, walk after his car got stuck in a snow drift.

The children lived with Aragon in Jerome, a tiny community located in the heart of the Idaho dairy industry. He was driving them to see their mother on Christmas Day morning when the car hit ice and slid into the snow bank.

Bear Aragon said he decided to set out on his own and walk because he wanted to find help for his father, and said his sister decided to go with him.

The boy survived after taking shelter in a single-stall restroom. Sage's body was found early the next morning curled up by a barbed wire fence, covered in snow.

Jurors began deliberating on Friday morning and sat somber as the verdict was read. They quickly filed out of the courtroom, declining to comment, after they were dismissed.

The prosecutor and defense attorney in the case both declined to comment, as did the children's mother, JoLeta Jenks.

Temperatures in the area at the time the girl was missing ranged from 27 degrees above zero to minus 5. Winds were blowing up to 25 mph with snow and ice.

"Sage froze to death, alone, in the horrible weather as a result of the defendants' decision," Lincoln County Prosecutor E. Scott Paul told jurors before they deliberated.

Paul said Aragon was "supposed to protect his children and he failed."

Public defender Patrick McMillen described how Aragon spent between two to three hours digging his car out of the snow after it got stuck, while the children sat in the back seat.

It was the boy, Bear, who decided to start walking, McMillen said, and Aragon was likely suffering from hypothermia, which causes confusion and poor judgment.

McMillen detailed how the children were bounding with energy when they left the car and stopped to make snow angels along the road.

"There's a difference between a tragedy and a felony," McMillen told jurors.

"There is no one in this courtroom who feels worse about Sage's death than that man," he said pointing at Aragon, who kept his head down through most of the proceedings. replaced by a male alternate.