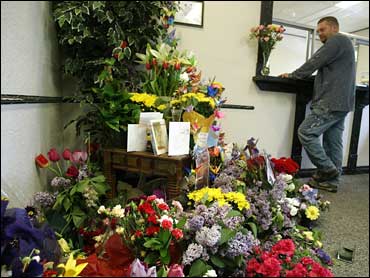 The wife of a gunman who killed two people and himself at a courthouse and a church was found dead inside her home, police said Monday.

Police said Hamilton sprayed dozens of bullets into a courthouse, killing a police officer and wounding a sheriff's deputy and a civilian, then went to a nearby church where he apparently killed a church sexton and himself.

Hamilton, 36, of Moscow, had a history of violence, Duke said.

Duke said police found Crystal Hamilton's body Sunday morning, but did not release the information so relatives could be notified. Rausch said she had worked at the courthouse janitorial department since 2000.

Police said Jason Hamilton started shooting from a parking lot across from the courthouse shortly after 11 p.m. Saturday. More than 30 bullets ripped through the county's emergency dispatch center, which investigators said seemed to be an attempt to lure others into the line of fire.

Officer Lee Newbill was killed as he rushed to the courthouse, and a sheriff's deputy helped pull Newbill out of the way before being shot, Duke said.

Newbill was the first officer killed in the line of duty in Moscow, reports CBS News correspondent Stephan Kaufman, and his fellow officers are taking it hard.

"Lee Newbill was an open person who was friends with everyone," Duke said.

Hamilton apparently retreated to the nearby First Presbyterian Church, where police heard the last gunshot shortly after 1 a.m.

About 6 a.m., three SWAT teams entered the church and found the bodies of Hamilton and another man, Duke said. An assault rifle, ammunition and spent shells were found next to Hamilton's corpse.

The Rev. Norman Fowler identified the victim as Paul Bauer, a grandfatherly presence at the church where he lived. Bauer was in his 60s.

Police did not release information about Hamilton's motive. "He was just shooting at anybody he could," Duke said.

Moscow, home of the University of Idaho, is located 80 miles south of Spokane, Wash., and surrounded by vast farmland. Streets in the area had been barricaded and residents had been told to stay inside. Graduation ceremonies at the university were just a week ago.

Newbill, the first officer at the scene, had served with the police department since March 2001 and is the city's first officer killed in the line of duty.

Deputy Brannon Jordon, a 17-year veteran, was shot as he took cover behind a tree after pulling Newbill out of the line of fire, Duke said. Jordon was in serious condition with multiple gunshot wounds, the assistant chief said.

The injured civilian was identified Monday by his mother as Pete Husmann, 20, a senior UI mechanical engineering student from Coeur d'Alene. She said he was shot three times as he rushed from his apartment to render aid after hearing the gunshots. He was in serious but stable condition and was to undergo another surgery Monday, she said.