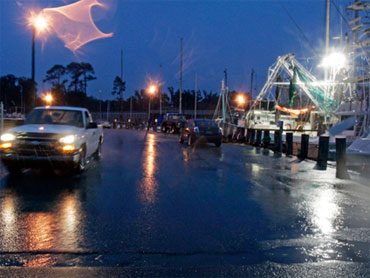 The U.S. National Hurricane Center in Miami said Ida's center first touched land as a tropical storm on Dauphin Island before heading across Mobile Bay for the Alabama mainland. Top sustained winds dropped to near 35 mph and it became a tropical depression. Ida was moving northeast about 9 mph and expected to turn eastward to follow the Florida Panhandle.

Tropical storm warnings were discontinued across Louisiana, Mississippi, Alabama and Florida. Forecasters said the storm had already spread most of its heavy rain onshore along the Gulf Coast ahead of Ida's center.

The storm had shut down nearly a third of oil and natural gas production in the Gulf as oil companies evacuated workers ahead of Ida. Two Chevron Corp. workers weren't injured but had to be rescued from an oil rig about 80 miles south of New Orleans that was in danger of toppling as Ida churned up high seas.

Still, demand for energy is so low due to the economic downturn, energy prices barely budged on Tuesday. Oil companies are expected to fly workers back out to platforms relatively quickly to restart operations.

Ida is a rarity - one of only six named hurricanes to form in November, notes CBS "Early Show" weather anchor Dave Price. Four of those never made landfall in the U.S. - only Hurricane Kate which hit Mexico and Florida in 1985, taking 15 lives as it made its way across the Caribbean.

Ida had been the third hurricane of this year's Atlantic season, which ends Dec. 1, but was the only one to threaten the U.S.

The storm left some debris and standing water in the streets on Dauphin Island, but many residents said they were unscathed aside from power outages.

"The only thing it did to us is knock out the power. Our houses and people are fine. I'm fine," resident Jimmy Wentworth said as he sipped coffee outside the Ship&Shore convenience store.

On the lower lying west end of the island, where many residents had evacuated, there was ankle deep water on parts of the road. A police officer standing guard in front of a stretch of the road said the extent of damage was uncertain.

Patricia Pitt's yard on the west end was strewn with minor debris, but otherwise her property was fine.

"It's a lot better than it could have been. I mean, who would think I would be out here walking around after a storm like that."

Atlanta resident Mike White drove down Monday to see the storm and was watching breakers crash at Gulf Shores early Tuesday. The sky was clear overhead but there were clouds all around.

"This is spectacular. It's almost like we are in the eyewall," White said.

In Orange Beach, east of Mobile Bay near the Florida state line, hotel desk clerk Frank Worley said Ida was more like a thunderstorm than a hurricane as it slopped ashore overnight.

"It was a lot of waves and wind, but it wasn't very harsh," he said. "There's a few people driving up and down the roads, but no one on the beach."

There were reports of scattered power outages, but water that filled parking lots and roadsides late Monday was gone by daybreak Tuesday. The rain had stopped, but the winds are still brisk, whipping palm fronds and whistling through doors. On the beach, dry sand blew like snow in the glow of lights.

Paula Tillman, a spokeswoman for the emergency operations agency in Baldwin County on the east side of Mobile Bay, said there were no reports of damage on the Alabama coast.

The sun was out in Mississippi's easternmost coastal county, where authorities said the storm was pretty much over and water was already receding from about two dozen local roads that had flooded. "We fared well," said Jackson County Emergency Operations Director Donald Langham, who added there were no reports of homes damaged.

Patrick Keene, 71, and his wife, Kathie, live in a doublewide trailer in the shadow the beachfront home in Pascagoula, Miss., that they are rebuilding four years after Hurricane Katrina.

While his wife retreated to their son's home across the state Monday night, Keene and his dog rode out the storm in the trailer.

"It's been worse. We get summer squalls frequently that are as bad as this one," Keene said Tuesday.

Few people had evacuated or sought refuge along Alabama's coast ahead of the former hurricane that once had potent winds over 100 mph. Officials said fewer than 70 people were in shelters that opened in Mobile and Baldwin counties, with a population of 565,000.

Ida started moving across the Gulf as the third hurricane of this year's quiet Atlantic tropical season, which ends Dec. 1.

Rain and some flooding seemed to be the biggest threats. Up to 8 inches could fall in some areas, with most of the coast getting between 3 and 6 inches.

Earlier in the week, a low-pressure system that the hurricane may have played a role in attracting had triggered flooding and landslides in El Salvador that killed at least 130 people.

Near New Orleans, a 70-year-old man was feared drowned when trying to help two fishermen whose boat had broken down in the Mississippi River on Monday, said Maj. John Marie, a Plaquemines Parish Sheriff's spokesman.

Florida Gov. Charlie Crist on Monday warned people to remain vigilant, saying Tropical Storm Fay was blamed for more than a dozen deaths in his state, Haiti and the Dominican Republic last year. No mandatory evacuations were ordered, but authorities in coastal areas encouraged people near the water or in mobile homes to seek shelter. Many schools closed, and several cruise ships were delayed as the U.S. Coast Guard closed Gulf Coast ports.

Pensacola Beach appeared largely undamaged Tuesday morning from Ida with the main road leading across the beach open and clear of water and sand.

Ronnie Powell, headed to his construction job on the beach, said he wasn't impressed with Ida.

"We've had thunderstorms worse than that," Powell said.

But Erin Strong was unnerved by Ida's power. Strong and her family from Memphis rent a beachfront home each November.

"The waves came up to the front of our house. I couldn't believe the electricity stayed on the entire time," she said.