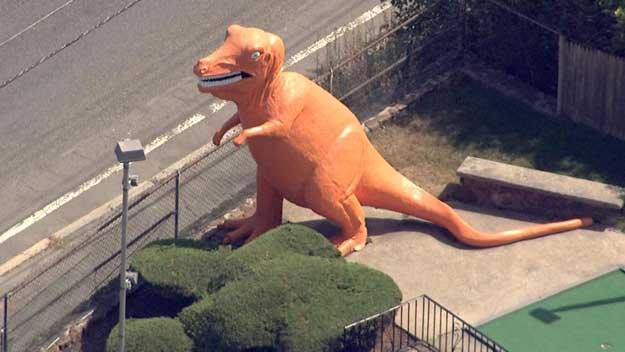 SAUGUS, Mass.  — The orange dinosaur along Route 1 in Saugus, Massachusetts, will live on, CBS Boston reported.

The local icon has been saved, and generations of fans can breathe a sigh of relief.

Since the early 60s, the orange dinosaur has greeted young and old at the local institution.  But the land has been sold and will become the new home of Essex Landing, a complex with hotels, stores, restaurants and apartments.

“We’re getting on and it’s time to make a change and this just seemed like a good fit,” said Diana.

For a while she was worried the dinosaur would go, well, the way of the dinosaurs.  But one of the developers bought it and promises to keep it on the property.

“It might stay where it is because it’s such a landmark.  When I tell people I bought this land in Saugus they say, where is it, and I say, you know where the orange dinosaur is?  They know where it is,” said Michael Barsamian, a developer.

Some of the other items will find new homes, and 4 mini-golf obstacles named after Diana’s grandchildren will move to her backyard.  And as the batting cages go silent, the golfers sink their final putts and the Dairy Castle serves its final cone, we can take some comfort knowing that a piece of the past remains.

“He’s been a part of Route 1 for all these years.  He belongs here.  He’s staying here,” said Diana.

The last day for the 58-year-old institution is September, 25.  Expect the new complex to open in late fall of 2017.