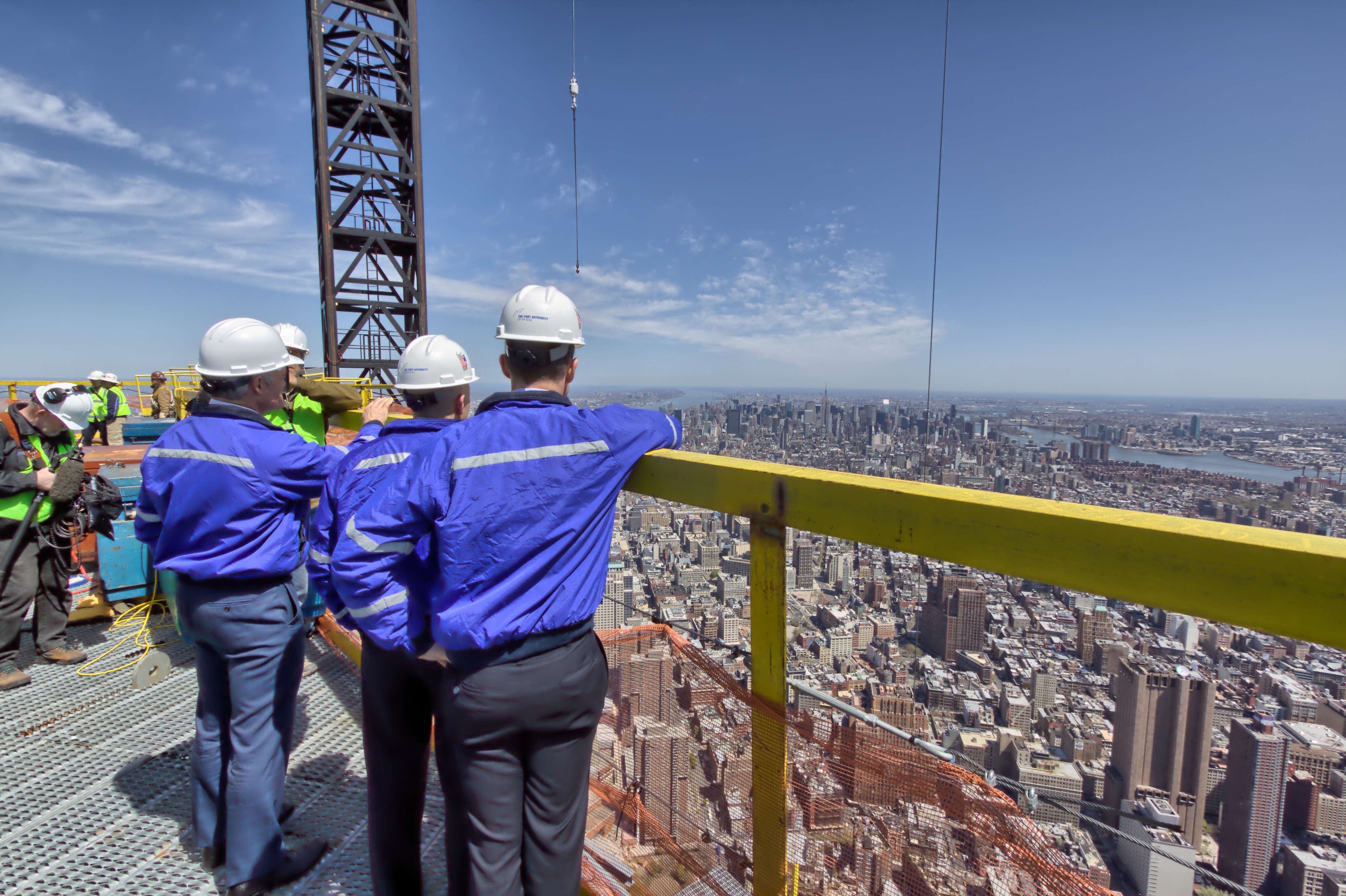 (CBS News) NEW YORK -- The crowning piece of the new tower designed to heal the hole left in the Manhattan skyline by the Sept. 11, 2001, terrorist attacks, was bolted into place Friday.

The final sections of the 408-foot spire installed Friday brings the building known as One World Trade Center to a symbolic 1,776 feet -- a number that reaches back to the year of American independence and reaches up to mark the tallest building in North America.

We dropped by as construction workers for the Port Authority of New York and New Jersey, the transportation agency that has always owned the 16-acre trade center site, were preparing to top off the tower.

For the first time, there are real passenger elevators that will take you to the top in 60 seconds. For now, you still need to connect to a construction elevator on the outside of the building to reach the 104th floor roof, which rises 1,368 feet, the same height as the Twin Towers.

Visitors will be allowed only on an indoor observation deck on floors 100 to 102. On a clear day, you can see for miles in every direction and look down on every other New York City landmark.

One World Trade Center has cost an eye-popping $4 billion, but you might say the views are priceless.

The skyscraping spire, which will hold broadcasting equipment, has come together in the past six months. Its 18 sections were made in Canada, trucked to New Jersey, and crossed the Hudson River on a barge. The first 68-ton piece was hoisted in December, and the last two sections, already adjoined, were hoisted just last week. A computer-controlled beacon on the spire's tip will be lit up at night.

"I'm going to think of the iron workers and sheet metal works and thousands of people who worked on this site who said, 'Give us a chance to build this building. We'll build it.' They got it right," said Bill Baroni, deputy executive director of the Port Authority.

Twenty-six thousand workers labored since 2006 to build the strongest skyscraper in history with a solid central core encasing the elevator banks and fire stairwells.

"It is 14,000 pounds per square inch of concrete, seven times the thickness of your average sidewalk. There's steel rebar that goes all the way from the bottom to the top," Baroni said.

The tower is built to withstand the impact of a jetliner, and it essentially stands on a pedestal 20 stories high to defend against a potential truck bomb, like the one terrorists set off at the World Trade Center in 1993.

Port Authority vice chairman Scott Rechler, who works in commercial real estate, is optimistic the tower's rentable 3.5 million square feet will be occupied. Half of the 70 floors of column-free office space is already spoken for, despite two terror attacks in the site's history.

"When people think about this building, what doesn't come to their mind is fear; it's pride. They're proud to be part of this building," said Rechler, who also defended the project's cost. "Let's think about when we sent a man to the moon. You know, we got a lot of value scientifically from it, but it was really more the national priority, and I think this building and this whole complex has some of that too."

The complex is already a daily destination for thousands of tourists visiting the National September 11 Memorial & Museum, which opened a year-and-a-half ago and is the only completed project on the site.

One company, publisher Conde Nast, has committed to 24 floors of One World Trade Center. It will be two more years before offices are finished and anybody moves in. When the office workers come starting in mid-2015, the memory of 9/11 will always be visible right outside their windows in the memorial pools that mark the footprints of the Twin Towers.

"On September 11, the terrorists took the lives of 3,000 people -- that's the most important thing that we lost, and we can never forget," Baroni said. "They also took the anchor of Lower Manhattan away. They took away those buildings that said, 'There's New York.' We could not allow that to continue."

Below: Lesley Stahl gets the first in-depth look at the National September 11 Memorial Museum.

The Chicago-based Council of Tall Buildings and Urban Habitatstold us it is waiting to receive the final architectural drawings before it rules on One World Trade Center's official height and whether the spire counts as a true architectural element as part of that.

The new tower will surpass Chicago's Willis Tower, formerly known as the Sears Tower, which has stood at 1,451 feet since it completion in 1973. Five buildings in Asia and one in the Middle East are now taller.

The Willis Tower was designed by Skidmore, Owings, and Merrill, the same architectural firm that redesigned One World Trade Center based on the winning concept by WTC site master planner Daniel Libeskind.

At 1,776 feet, One World Trade Center would become the second-tallest building in the world behind the Burj Khalifa Tower in Dubai, which was completed in 2010 at 2,716 feet.

Fencing goes up around Capitol ahead of rally