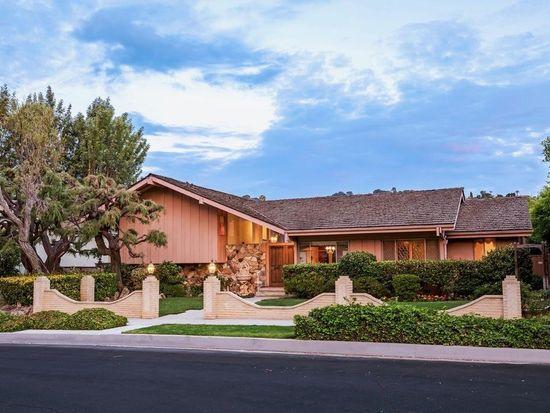 It's a story ... of a house named Brady. The iconic house that belonged to "The Brady Bunch" is now on the market, and buyers that want to own a bit of nostalgia can purchase it for $1.885 million.

The three-bedroom, two-bathroom home in the Studio City neighborhood is located along the Los Angeles River, CBS Los Angeles reports. It was used in the opening and closing shots of the classic sitcom, which ran from 1969 to 1974. The rest of "The Brady Bunch" was filmed in a Los Angeles studio. So the famously-blended family didn't actually "live" inside the house, but its exterior has become so famous, it even has its own Yelp page. It is listed as a landmark and historical building on Yelp, and now it's listed as a home for sale on Zillow.

Its asking price of $1.885 million represents a big windfall for the current owners, who bought the property for $61,000 in 1973, according to purchase records, the Associated Press reports. That means this is the first time the house will have changed hands since "The Brady Bunch" was still in its heyday.

The inside of the home has been updated but still has touches that match the 1970s facade. A MusiCall intercom, floral wallpaper, wood paneling and stone fireplace have been meticulously maintained. Even though the show wasn't filmed inside the house, with these '70s details, it could've been.

The house at 11222 Dilling St. is as synonymous with "The Brady Bunch" as the line "Marcia, Marcia, Marcia." Fans of the show can't think of the Brady family without picturing the split-level home they "lived" in.

Real estate firm Douglas Elliman is bracing for a flood of interest, listing agent Ernie Carswell told the Los Angeles Times. They will only be showing the home by appointment in hopes of weeding out the voyeurs from the serious buyers. "We're preparing for an avalanche," Carswell said. "Emails, telephone calls — we may see upwards of 500 calls a day."

Due to the icon nature of the house, Carswell said they won't just jump on the first big offer — especially if it is from a developer who wants to tear it down and rebuild on the 12,500-foot lot. The house may not belong to the Brady family, but it is still a symbol of the re-married parents, six kids and quirky housekeeper that millions of Americans invited into their own homes back in the day.