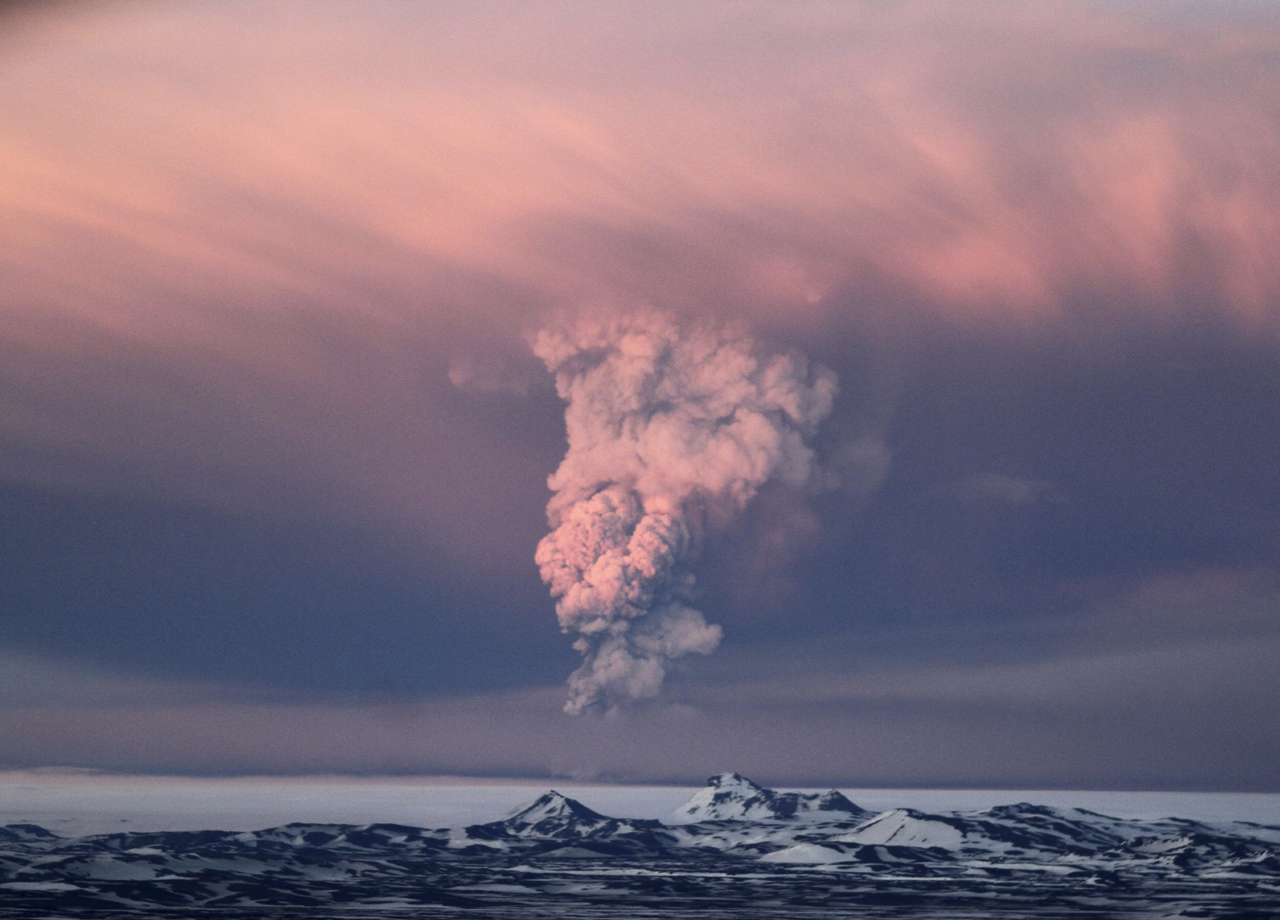 REYKJAVIK, Iceland - An Icelandic volcano flung ash, smoke and steam miles into the air and dropped a thick layer of gray soot in an eruption far more forceful — but likely far less disruptive — than the one that grounded planes across Europe last year.

The country's main airport was closed Sunday and pilots were warned to steer clear of Iceland as areas close to the Grimsvotn (GREEMSH-votn) volcano were plunged into darkness. But scientists said another widespread aviation shutdown was unlikely, in part because the ash from this eruption is coarser and was falling to Earth more quickly.

The volcano, which lies beneath the ice of the uninhabited Vatnajokull glacier in southeast Iceland, began erupting Saturday for the first time since 2004. It was the volcano's largest eruption in 100 years.

The ash from Grimsvotn — about 120 miles east of the capital, Reykjavik — turned the sky black Sunday and rained down on nearby buildings, cars and fields. Civil protection workers helped farmers get their animals into shelters and urged residents to wear masks and stay indoors. Late Sunday, the ash cloud reached the capital, prompting residents to shut their windows against the grainy fog.

Scientists said the eruption won't have the global impact of last year's eruption some 80 miles away at the Eyjafjallajokull (pronounced ay-yah-FYAH-lah-yer-kuhl) volcano, which left 10 million travelers stranded around the world.

"It is not likely to be anything on the scale that was produced last year when the Eyjafjallajokull volcano erupted," University of Iceland geophysicist Pall Einarsson told The Associated Press. "That was an unusual volcano, an unusual ash size distribution and unusual weather pattern, which all conspired together to make life difficult in Europe."

Trans-Atlantic planes — including Air Force One, which carried President Obama to Ireland on Monday morning — were told to stay away from Iceland.

The European air traffic control agency in Brussels, Eurocontrol, however, said there was no impact on European or trans-Atlantic flights further south and said it did not anticipate any impact through Monday.

Britain's Meteorological Office, which runs Europe's Volcanic Ash Advisory Center, said the plume from the volcano would spread largely northeast until Monday, but some ash would creep south and east, toward the crowded skies over northern Europe.

Where it goes after that depends on the intensity of the eruption and weather patterns.

A Met Office spokeswoman said if the eruption continues at its current rate, "the U.K. could be at risk of seeing some volcanic ash later this week." She spoke on condition of anonymity because she wasn't authorized to be quoted by name.

University of Iceland geophysicist Magnus Tumi Gudmundsson said the Grimsvotn eruption was "much bigger and more intensive" than last year's eruption and 10 times as powerful as Grimsvotn's last explosion in 2004.

"There is a very large area in southeast Iceland where there is almost total darkness and heavy fall of ash," he said. "But it is not spreading nearly as much. The winds are not as strong as they were (last year)."

He said the ash now is coarser than in last year's eruption, falling to the ground more quickly.

Grimsvotn's eruption in 2004 lasted for several days and briefly disrupted international flights. The volcano also erupted in 1998, 1996 and 1993.

Sparsely populated Iceland is one of the world's most geologically unstable countries, sitting astride the Mid-Atlantic Ridge, where the Eurasian and North American continental plates rub up against one another. Frequent earthquakes push magma from deep underground toward the surface, and volcanic eruptions are common. The ground is covered by hardened black lava from past eruptions and steam belches from the earth — harnessed by Icelanders for geothermal power.

Volcanic eruptions in Iceland often spark flash flooding from melting glacier ice but rarely cause deaths. Usually they only have a local impact, but when they do draw the world's attention, it's in a spectacular way.

The 1783 eruption of the Laki volcano spewed a toxic cloud over Europe, killing tens of thousands of people. Crops failed and famine spread.

In April 2010, the Eyjafjallajokull eruption prompted aviation officials to close Europe's air space for five days out of fear that the ash could harm jet engines. Thousands of flights were grounded, airlines lost millions of dollars and weary travelers slept on airport floors across northern Europe.

Some airline chiefs complained that regulators had overreacted. But a study last month in the Proceedings of the National Academy of Sciences concluded the shutdown had been justified. It said the hard, sharp particles of volcanic ash blasted high into the air could have caused jet engines to fail and sandblasted airplane windows.

Scientists said there were already signs that the latest eruption was tapering off.

"The intensity of the eruption has decreased markedly overnight," Matthew Roberts of the Icelandic Meteorological Office told the BBC, saying the ash plume had fallen to about 6 miles high.

Gudmundsson said the duration of the latest eruption would probably be short.

"In two or three days, the worst should be over," he said.