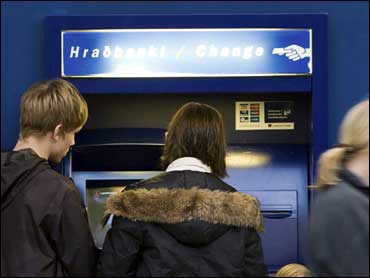 This volcanic island near the Arctic Circle is on the brink of becoming the first "national bankruptcy" of the global financial meltdown.

Home to just 320,000 people on a territory the size of Kentucky, Iceland has formidable international reach because of an outsized banking sector that set out with Viking confidence to conquer swaths of the British economy - from fashion retailers to top soccer teams.

The strategy gave Icelanders one of the world's highest per capita incomes. But now they are watching helplessly as their economy implodes - their currency losing almost half its value, and their heavily exposed banks collapsing under the weight of debts incurred by lending in the boom times.

"Everything is closed. We couldn't sell our stock or take money from the bank," said Johann Sigurdsson as he left a branch of Landsbanki in downtown Reykjavik.

The government had earlier announced it had nationalized the bank under emergency laws enacted to deal with the crisis.

"We have been forced to take decisive action to save the country," Prime Minister Geir H. Haarde said of those sweeping new powers that allow the government to take over companies, limit the authority of boards, and call shareholder meetings.

A full-blown collapse of Iceland's financial system would send shock waves across Europe, given the heavy investment by Icelandic banks and companies across the continent.

One of Iceland's biggest companies, retailing investment group Baugur, owns or has stakes in dozens of major European retailers - including enough to make it the largest private company in Britain, where it owns a handful of stores such as the famous toy store Hamley's.

Kaupthing, Iceland's largest bank and one of those whose share trading was suspended last week to stop a huge sell-off, has also invested in European retail groups.

Thousands of Britons have accounts with Icesave, the online arm of Landsbanki that regulators said was likely to file for bankruptcy after it stopped permitting customers to withdraw money from their accounts Tuesday.

To try to wrest control of the spiraling situation, the government also loaned $680 million to Kaupthing to tide it over and said it was negotiating a $5.4 billion loan from Russia to shore up the nation's finances.

The speed of Iceland's downfall in the week since it announced it was nationalizing Glitnir bank, the country's third largest, caught many by surprise despite warnings that it was the "canary in the coal mine" of the global credit squeeze.

Famous for its cod fishing industry, geysers, moonscape and the Blue Lagoon, Iceland was the site of the Cold War showdown in which Bobby Fischer of the United States defeated Boris Spassky of the Soviet Union in 1972 for the world chess championship. Last year, Iceland won the U.N.'s "best country to live in" poll, with its residents deemed the most contented in the world.

"I'm really starting to get worried now. Everything is bad news. I don't know what's happening," said retiree Helga Jonsdottir as she headed to a supermarket.

Icelanders are also beginning to question how a relative few were able to generate the disproportionate wealth - and associated debt - that Haarde has warned puts the entire country at risk of bankruptcy.

Iceland's reinvention from the poor cousin in Europe to one of the region's wealthiest countries dates to the deregulation of the banking industry and the creation of the domestic stock market in the mid-1990s.

Those free market reforms turned Iceland from a conservative, inward-looking country to one of a new generation of internationally educated young businessmen and women who were determined to give Iceland a modern profile far beyond its fishing base.

Entrepreneurs become its greatest export, as banks and companies marched across Europe and their acquisition wallets were filled by a stock market boom and a well-funded pension system. Among the purchases were the iconic Hamley's toy store and the West Ham soccer team.

Back home, the average family's wealth soared 45 percent in half a decade and gross domestic product rose at around 5 percent a year.

But the whole system was built on a shaky foundation of foreign debt.

Those external liabilities mean the private sector has had great difficulty financing its debts, such as the more than $5.25 billion racked up by Kaupthing in five years to help fund British deals.

Iceland is unique "because the sheer size of its financial sector puts it in a vulnerable situation, and its currency has always been seen as a high risk and high yield," said Venla Sipila, a senior economist at Global Insight in London.

The krona is suffering in part from a withdrawal by a falloff in what are called carry trades - where investors borrow cheaply in a country with low rates, such as Japan, and invest in a country where returns, and often risks, are higher.

After watching the free-fall for several days, the Central Bank of Iceland stepped in Tuesday to fix the exchange rate of the currency at 175 - a level equal to 131 krona against the euro.

Haarde said he believed the measures had renewed confidence in the system. He also was critical of the lack of an Europe-wide response to the crisis, saying Iceland had been forced to adopt an "every-country-for-itself" mentality.

He acknowledged that Iceland's financial reputation was likely to suffer from both the crisis and the response despite strong fundamentals such as the fishing industry and clean and renewable energy resources.

As regular Icelanders begin to blame the government and market regulators, Haarde said the banks had been "victims of external circumstances."

Richard Portes of the London Business School agreed, noting the banks were well-capitalized and had not bought any of the toxic debt that has brought down banks elsewhere.

"I believe it is absolutely wrong to say these banks were reckless," said. "Quite the contrary. They were hugely unlucky."