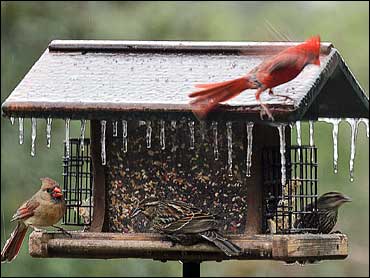 Thousands of people stuck it out in dark, unheated homes Wednesday and hundreds of others hunkered down in shelters waiting for restoration of electrical service knocked out by the snow and ice storm blamed for 60 deaths in nine states.

Nearly 290,000 homes and businesses in several states were still without electricity Wednesday because of the ice, snow, and high wind that battered an area from Maine to Texas, where roads and schools were closed Wednesday.

At the First Baptist Church in McAlester, Okla., where most of the city's 18,000 residents have lacked power for four days, residents huddled under blankets and in front of space heaters.

"If it wasn't for the shelter, I don't know where we'd be," said Tara Guzman, 38, while playing board games with her four children. "We're tough; we lasted when the power went out until (Monday). We brought mattresses out in the living room and cuddled."

Some 92,000 customers still had no electricity Wednesday in Oklahoma. Little sunshine was expected to help melt the ice until Thursday or Friday, said National Weather Service meteorologist Kevin Brown.

The wave of arctic air that trailed the storm system helped to kick off more freezing rain and snow Wednesday in Texas, closing schools and some businesses and government offices. Even the Alamo was closed to tourists in San Antonio because of cold and rain.

A 300-mile stretch of Interstate 10 in Texas from Fort Stockton to San Antonio had been closed since Tuesday because of fresh snow atop a layer of ice.

Tow truck driver Buddy Poole stationed himself near an overpass on Interstate 45 in Huntsville, Texas, on Tuesday.

"It's bad out there because nobody knows how to drive on that ice," he told CBS affiliate KHOU-TV. "They run it too fast, and then when they get to the bridge, they slam on the brakes on the bridge, and that's when they lose it."

"You always need to keep your speed down when driving in ice or snow," the American Automobile Association's Robert Sinclair warned CBS News' Wednesday. "Speed is the main cause for any crash in those conditions."

Joe and Sarah Stokhaug were turned away from two fully booked motels after I-10 shut down. They and at least 50 other motorists ended up in a convention center in Ozona.

"They have air mattresses and cots for everybody — and pizza and doughnuts," Joe Stokhaug said. "We've already made a couple friends here who are from Los Angeles."

"We had about 50 cots in route from Fort Stockton, but the roads closed up," Morrow said. "The jailhouse has provided blankets and pillows that are normally used for the inmates."

That same cold air mass icing up Texas also turned the Northeast into a freezer Wednesday, with morning lows of 16 below zero at Caribou, Maine, and 19 above in New York City, ending a lengthy unseasonable warm spell, the National Weather Service reported.

The combination of the temperature and wind in Maine produced wind chills as low as 40 below in some areas. New Hampshire's 6,288-foot Mount Washington registered a wind chill of 77 below.

Eighty-five shelters across Missouri were expected to accommodate more than 3,600 people Tuesday night, according to the State Emergency Management Agency. About 163,000 homes and businesses still had no electricity.

"There are no services," Mayor Jerry Hardesty said. "I've talked to residents who have lived here 50 years and nobody can remember it ever being this bad."

The town lost all its power by Saturday. Water towers ran dry Sunday, and water service was restored only late Monday after the National Guard hooked a generator up to a pumping station.

Elsewhere, about 24,000 customers in Michigan were still blacked out early Wednesday, along with an estimated 11,000 in New York state and 10,000 in New Hampshire.

Some New Hampshire customers might not get electricity until sometime Thursday.

"With thick ice continuing to coat power lines, repairs are taking longer than normal. Ice-coated limbs and branches must be lifted off lines by manually banging ice off the trees," Martin Murray, spokesman for Public Service Co. of New Hampshire, said in a statement.

Since Friday, the storm system's waves of freezing rain, sleet and snow have been blamed for at least 20 deaths in Oklahoma, nine in Missouri, eight in Iowa, four each in New York and Michigan, six in Texas, three in Arkansas and one each in Maine and Indiana.

Elsewhere, Washington state's Puget Sound area, known for drizzle rather than its recent freezing weather, was hit by another round of snow Tuesday, snarling traffic and closing schools for more than 380,000 students. Oregon's Legislature delayed hearings and sessions until afternoon because of the weather.

In California, three nights of freezing weather have destroyed up to three-quarters of the state's citrus crop, and that could mean $1 billion in losses, reports

But that doesn't mean buying citrus this winter will put a strain on the wallet.

"Florida does supply most of the oranges for juice," he said.

Gov. Arnold Schwarzenegger has asked the federal government for disaster aid. Other crops, including avocados and strawberries, also suffered damage.

"This is not just about the crop this year. It could also have a devastating effect next year," Schwarzenegger said.

It was cold again in California on Wednesday morning, but not quite as bad as in recent days. Still, it was below the freezing mark throughout the interior valleys.