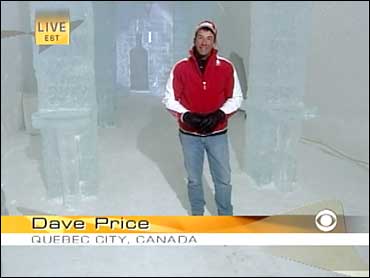 It's the Ice Hotel Quebec-Canada, just outside Quebec City.

braved the elements inside to give viewers of The Early Show a tour (video)
Friday.

Said Price, "You have artwork. You have ambience. All you're missing, really, is heat."

He pointed out that, "The snow actually insulates you."

Believe it or not, the ice hotel is considered a luxury facility, even though the temperature inside its 34 rooms is only 28 degrees.

CEO Jacques Desbois told Price he loves winter, and the hotel enables him to enjoy the season in "a surrealistic way."

The hotel is put together for a January opening each year, then brought down in April.

explained to Price
that the hotel is built, basically, with only 10 tools.

"It takes about a-month-and-a-half to build, and 60 people are working," Dube said. "Basically, two things, the ice guys and the snow guys.

"We actually make our own snow. It's a special mixture so we can adjust the humidity. We have metal frames that we put up together. We blow the snow with a big snow-blower and let it harden for a few days, and then remove the cranes, and then it stays together" until we bring it down again.

The walls are four-feet thick in some places, "hard as concrete," Price observed.

He noted that Quebec gets about 132 inches of snow a year.