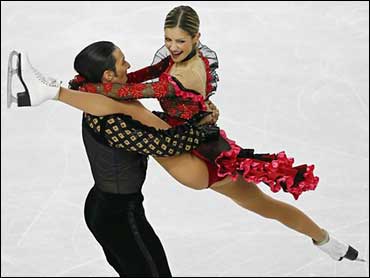 Tanith Belbin and Ben Agosto were still on the ice long after getting their silver medals. They posed for pictures, clowned for the crowd, waved the flag and tried to thank every single fan who showed up to cheer them.

After all, they were the first American ice dancers in 30 years with a medal to celebrate, The Early Show national correspondent Tracy Smith reports.

"This is absolutely amazing," Agosto said Monday night, wearing a smile that looked as if it would never come off. "We really feel this medal belongs to a lot of people who put in years and years of support. And for the teams that came before us and put in years of dedication building the sport of ice dancing in the U.S.

"It is hard to put into words. It is really wonderful."

Tatiana Navka and Roman Kostomarov gave Russia another figure skating gold medal, making it three in as many events and continuing that country's long success in dance. Since it was added in 1976, a Russian or Soviet couple has won all but two of the golds in the event.

With Navka and Kostomarov on the verge of retirement, though, that dynasty could be coming to an end.

And Belbin and Agosto hold the promise of a new one.

"I know for a fact it will not take another 30 years," Belbin said emphatically. "Anyone who was fortunate to witness our U.S. nationals, you would be so impressed with the level of ice dancing in the United States. I think it will be less time for more medals for the U.S."

In related developments:
Belbin and Agosto, who train with the Arctic Edge Figure Skating Club in suburban Detroit, finished with 196.06 points, 4.58 points behind Navka and Kostomarov. Elena Grushina and Ruslan Goncharov of Ukraine were third.

"We're very grateful for everyone who helped us come this far," said Belbin, who lives in Bloomfield Hills, Mich. "There was a lot riding on our shoulders, and now we can come out and say it's worth it."

Americans have been about as good in ice dancing as Jamaicans in bobsled. They hadn't won a medal since Colleen O'Connor and Jim Millns took the bronze back in 1976 — more than a half-decade before Belbin or Agosto were born. Nobody even had a shot since the mid-1980s.

But Belbin and Agosto have shattered those ideas about American ice dancers having two left skates. Junior world champions in 2002, they won a silver medal at the senior level last year and established themselves as favorites for Turin.

Despite their passion on the ice, the pair are not romantically involved. "My girlfriend at home got a ton of e-mails on the day, and said are you guys still dating? What's going on? That means we're doing our job correctly," Agosto tells Smith. "We're very lucky we have such a good friendship and feel so comfortable with each other, we can portray anything on the ice."

There was one slight problem: the Canadian-born Belbin wasn't eligible for the games.

Belbin moved to the Detroit area in 1998 to train with Agosto but didn't get her green card until 2002. A typical five-year wait for naturalization would have shut her out of these games, since only U.S. citizens can be on the Olympic team.

Congress took up her plight, though, and passed legislation that allowed her to take advantage of recent changes that shortened the naturalization process. She was sworn in Dec. 31, just in time to get a picture for her passport and a plane ticket to Italy.

"It's been a very up and down year with our emotions," said Agosto, who was mesmerized by the hole in the medal, repeatedly holding it up and playing peek-a-boo. "We were not even sure we would be here. And to now be here and with this medal around our necks is amazing."