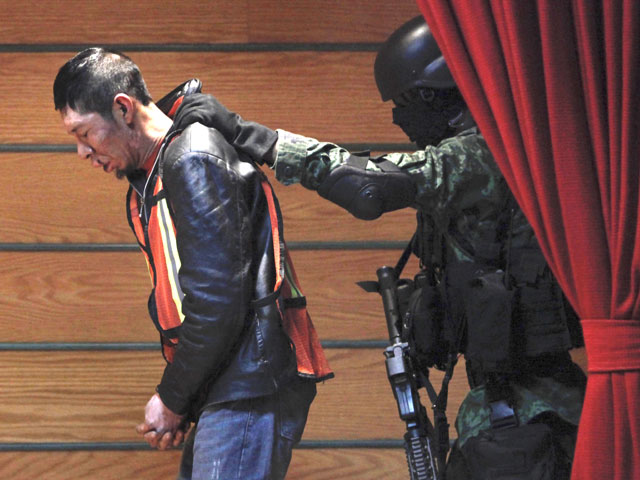 "Project Southern Tempest is the largest ever ICE-led gang enforcement operation targeting gangs with ties to drug trafficking organizations," said ICE Director John Morton in a press release. "Through gang enforcement operations like Project Southern Tempest and Project Big Freeze last year, ICE will continue to disrupt and dismantle these transnational gangs and rid our streets not only of drug dealers, but the violence associated with the drug trade."

Of the 678 gang members or associates arrested, there were 133 different gang affiliations; 447 were charged with criminal offenses; 231 were administrative arrests; 322 had violent criminal histories; and 421 were foreign nationals.

In addition to the arrests, during the operation agents seized 86 firearms, eight pounds of methamphetamine, 30 pounds of marijuana, one pound of cocaine, more than $70,000 in U.S currency and two vehicles.

Among those arrested during Project Southern Tempest were:

- Andrey Melnikov, 36, a Russian national with legal permanent residence status and an associate of the Valleros gang was arrested in Oceanside, Calif., for auto theft. His criminal convictions include possession of weapon on school grounds/carrying loaded firearm public place and felon in possession of a firearm.

- Cesar Enrique Barreiro, 27, a U.S. citizen and member of the Lennox 13 gang was arrested in Lennox, Calif., for RICO charges from an ongoing multi-agency investigation. His criminal convictions include for aggravated assault with serious bodily injury. He faces federal criminal prosecution on racketeering charges.

- Shawn Allison, 32, a Jamaican national and member of the Jamaican Posse gang was arrested in Bronx, N.Y., for attempted murder. His convictions include possession with intent to distribute and criminal contempt. He faces state criminal prosecution on charges of attempted murder.

- Gustavo Morales, 52, a Mexican national and an associate of the Boomerangz gang was arrested in Reading, Pa., for federal offenses related to narcotics and weapons violations. His criminal history has a conviction for re-entry. He faces federal prosecution for illegal re-entry and narcotics and weapon offenses.

Those arrested came from 24 countries in South and Central America, Asia, Africa and the Caribbean.

In related news, Mexican authorities say a regional boss for the Zetas drug gang accused in ICE agent Jaime Zapata's slaying has been captured. On Feb. 15, Zapata was shot along with fellow agent Victor Avila while driving on a highway in San Luis Potosi. Avila was wounded in the attack.

Three gun-smuggling suspects are set to appear in a Dallas federal court in connection with last month's shooting of Zapata in Mexico. They were arrested for possessing weapons with wiped-out serial numbers.

The probable cause hearing was set for Tuesday, a day after three men were arrested in their Dallas-area homes.

"An awful lot of very good work is being done in Mexico and here in the United States to bring the killers to justice," Morton said.

At the time of the slaying, the agents, who were working for the U.S. embassy, were unarmed in accordance with Mexican laws governing U.S. law enforcement personnel working inside Mexico.

Morton said it's up to the Mexican government to determine if US agents should be permitted to carry weapons, but he added, "Obviously I am very concerned about the safety of our agents and their families."