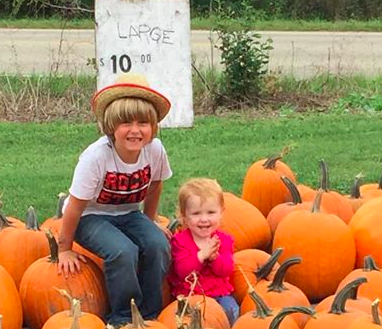 A 6-year-old Michigan boy with Type 1 Diabetes wanted a service dog so he could ride the school bus and visit friends. Instead of asking his parents to buy him a pup, he started selling pumpkins that he grew — and now, his parents say he's already sold out of them.

Ian Unger from Sand Lake, Michigan, began kindergarten this year and was in "kindergarten readiness" last year, but has never been able to ride the school bus with the other kids his age, his mom Katrina Christensen told CBS News.

Ian requires constant supervision to monitor his insulin pump and blood sugar levels, so it's too dangerous for him to be without an aide or someone who is trained in operating the device.

Ian's school district's nurse recommended that Ian get an aide and the district said Ian could not ride the bus without supervision this fall, so his parents have been driving him into school each day, according to Christensen.

The aide doesn't have to be human — a well-trained diabetic alert dog can accompany Ian to school.

The dogs can "sense blood sugar changes before blood testing could show it," said Christensen. The pups can also retrieve the snacks or things those with diabetes may need if they are in danger.

"Ian just wanted one of the dogs because he couldn't do things. He knew he couldn't ride the bus last year," said Christensen.

However, the family thought it would take a few years to be able to afford the dog, as they can range up to $25,000, according to Christensen.

So, Ian came up with a great idea to raise the money: pumpkins.

Christensen and Ian planted the seeds in June — and their crop took off.

"He put some pumpkin seeds in the ground and didn't really take care of them, but let me tell you, he grew a lot of pumpkins," Ian's father, Jeff Unger, told CBS News, "Him and his mom counted over 150."

On Sept. 26, Christensen posted on Facebook announcing "Ian's pumpkins are ready!" and that her son was "raising money for a diabetic alert service dog." The post has now been shared over 700 times.

The pumpkins sold out in a matter of weeks. Unger said people even began bringing their own pumpkins and giving them to the kindergartner for him to sell.

"We had no idea this was going to blow up," Unger told CBS News.

In addition to the pumpkin sales, Christensen created a fundraiser on Facebook for her son. So far, they've raised over $21,000 of a stated $20,000 goal.

Christensen said Ian hopes for a German Shepherd. "He thinks they're so cool, because the police have them," she said.

Unger said the family will donate any extra money, once they purchase a dog, to the JDRF. "If this takes off, maybe somebody else will get one," Unger said. "It could help some other child."