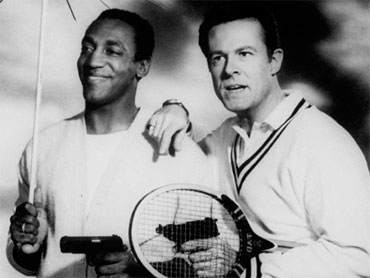 Robert Culp, the actor who teamed with Bill Cosby in the racially groundbreaking TV series "I Spy" and was Bob in the critically acclaimed sex comedy "Bob & Carol & Ted & Alice," died Wednesday after collapsing outside his Hollywood home, his agent said. Culp was 79.

His manager, Hillard Elkins, said the actor was on a walk when he fell. He was taken to a hospital and pronounced dead just before noon. The actor's son was told he died of a heart attack, Elkins said, though police were unsure if the fall was medically related.

Culp had been working on writing screenplays, Elkins said.

"I Spy," which aired from 1965 to 1968, was a television milestone in more ways than one. Its combination of humor and adventure broke new ground, and it was the first integrated television show to feature a black actor in a starring role.

The series greatly advanced the careers of both actors.

Cosby, who had achieved fame as a standup comedian, proved he could act. Culp, who had played mostly heavies in movies and TV, went on to become a film star.

He followed "I Spy" with his most prestigious film role, in "Bob & Carol & Ted & Alice." The work of first-time director Paul Mazursky, who also co-wrote the screenplay, it lampooned the lifestyles of the sexual revolution of the 1960s. Bob and Carol (Culp and Natalie Wood) were the innocent ones who were introduced to wife-swapping by their best friends, Ted and Alice (Elliott Gould and Dyan Cannon).

Culp also had starring roles in such films as "The Castaway Cowboy," "Golden Girl," "Turk 182!" and "Big Bad Mama II."

His teaming with Cosby, however, was likely his best remembered role.

Cosby won Emmys for actor in a leading role all three years that "I Spy" aired, and Culp, who was nominated for the same award each year, said he was never jealous.

Both he and Cosby were involved in civil rights causes, and when Martin Luther King Jr. was assassinated in 1968 the pair traveled to Memphis, Tenn., to join the striking garbage workers King had been organizing.

Culp and Cosby also costarred in the 1972 movie "Hickey and Boggs," which Culp also directed. This time they were hard-luck private detectives who encountered multiple deaths. Audiences who had enjoyed the lightheartedness of "I Spy" were disappointed, and the movie flopped at the box office.

After years of talking up the idea, they finally re-teamed in 1994 for a two-hour CBS movie, "I Spy Returns."

In his first movie role Culp played one of John Kennedy's crew in "PT 109."

His first starring TV series, "Trackdown" (1957-1959) was a Western based partly on files of the Texas Rangers. In the 1980s, he starred as an FBI agent in the fantasy "The Greatest American Hero."

He remained active in movies and TV. Among his notable later performances was as a U.S. president in 1993's "The Pelican Brief." More recently, he also had a recurring role in the sitcom "Everybody Loves Raymond" and appeared in such shows as "Robot Chicken," "Chicago Hope" and an episode of "Cosby."

Robert Martin Culp, born in 1930 in Oakland, led a peripatetic existence as a college student, attending College of the Pacific in Stockton, Calif., Washington University in St. Louis and San Francisco State College before landing at the University of Washington's drama school.

Then at age 21, a semester removed from his degree, he moved to New York, where he began landing roles in off-Broadway plays. One of them was in "He Who Gets Slapped."

"I saw it in college in Seattle, and I said, `My God, that's my part, that's my part,"' he once told an interviewer. After he won the role in a Greenwich Village production "the floodgates opened," he said.

Good reviews and an Obie award led to offers from Hollywood.

Culp was married five times, to Nancy Ashe, Elayne Wilner, France Nuyen, Sheila Sullivan and Candace Faulkner. He had four children with Ashe and one with Faulkner.