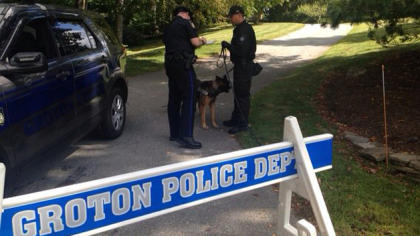 BOSTON — A 22-year-old recent Oberlin College graduate and jazz drummer from Maine will face murder charges Monday in the slayings of four adults found at a Massachusetts home.

Orion Krause, of Rockport, Maine is scheduled for arraignment in Ayer District Court in connection with the deaths of an elderly man and woman and two middle-aged women in Groton, a town about 43 miles northwest of Boston, the Middlesex district attorney's office said Sunday.

Town police found the man and two of the women dead inside the house and the other woman's body outside on Friday night. The victims' have yet to be identified.

Middlesex District Attorney Marian Ryan said the victims appeared to have died of blunt force trauma. She called the situation "a tragic incident of family violence" but it's unclear how Krause is related to the victims.

Neighbor Wagner Alcocer, 52, unwittingly became a witness when the suspect showed up at his back door, naked and muddy, that evening and calmly told Alcocer, "I murdered four people," Alcocer told the Boston Globe.

Alcocer told The Associated Press that the suspect's eyes were "very red" and he had cuts on his body and blood above his eye and knee but was unarmed and seemed vulnerable.

"He looked like a nice kid who needed help, he was skinny (and) tall. I thought he was the victim of the prank, or in an accident or had a mental health problem. He wasn't bleeding profusely or anything," Alcocer said.

Alcocer, who had never seen Krause until that night, had thought the alleged confession was "just crazy talk." It wasn't until Krause was later taken away in an ambulance that a detective confirmed to Alcocer that the killings had taken place, Alcocer said.

It's unclear whether Kraus has an attorney. Relatives of Krause in Rockport, Maine, did not respond to a request for comment Sunday.

Oberlin College & Conservatory, a liberal arts college in Ohio with a prestigious music program, has identified Krause as a 2017 graduate of the school's conservatory.

"The nature of this crime is horrific, and the grief of family and friends immeasurable. And yet Orion is one of our own," said Oberlin president Carmen Ambar and the conservatory's dean, Andrea Kalyn, in an email to the school community.

Krause's Facebook page says he studied jazz at the school. The school's website shows that Krause put on a senior recital in April.