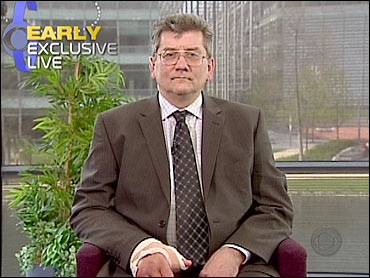 A British man who hypnotized himself before hand surgery last week so he could skip the anesthetic says he was fully awake and pain-free during the 83-minute procedure.

Professional hypno-therapist and psychotherapist Alex Lenkei, 61, put himself into a deep trance so he wouldn't feel the pain -- he says it took him only 30 seconds to put himself under.

During the surgery, some bone at the base of his thumb was removed, and some joints were fused in an attempt to improve his arthritis.

Lenkei says anesthetic has gotten him nauseous before, and he just feels avoiding it is healthier than using it, in part because it takes awhile to get it out of your system.

Doctors "were using a chisel, hammer to basically break a sort of walnut-sized bone in the hand to take it out. They also used small medical saw to attach tendon to the thumb," he told Early Show co-anchor Maggie Rodriguez Tuesday.

"And at the same time, the anesthetist had my vital signs monitored all the time. They were fully in control of everything. They hooked me up with reference to anesthetic if I needed it, but it was not necessary."

This wasn't the first time Lenkei went that route, he says: "In 1996, I had a hernia operation with no anesthetic. But at that time, I had a colleague with me to stand by with hypnosis. And, being a professional, I know how to go into what they call deep hypnosis. And the local hospital was kind enough to actually allow me to use hypnosis for the operation."

Lenkei says there's a lesson to be learned here for the medical profession, "basically, that hypnosis can be actually used post- and pre-operation to actually help the patient (relax) for a much better successful operation. And I feel that doctors ought to investigate this in a lot more detail and actually use it for the benefit of the patient."

Lenkei says people can heal more quickly if hypnosis is used, and patients are more relaxed.

A doctor was in the operating room says only a small percentage of people would be able to put themselves into such a deep trance, so it wouldn't work for large numbers of people.

However, it's interesting to note that hypnosis was used quite widely before anesthetic was developed.