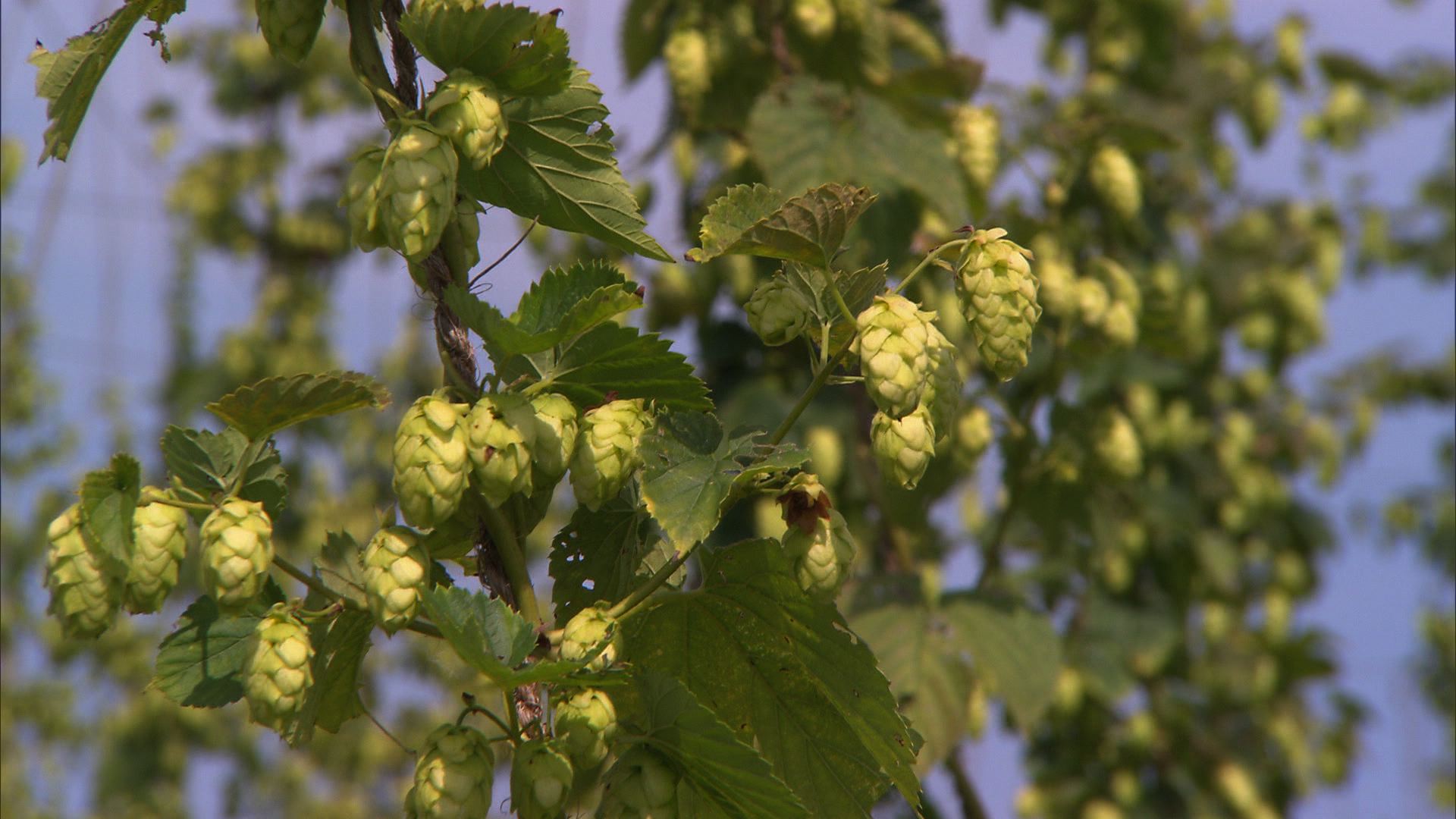 This holiday weekend, if you cracked open a cold one, you were probably offered a craft beer.

A record number of breweries have opened this year -- according to the Brewers Association, an average of almost four each day. The main ingredient giving those complex beers their taste is the hops flower. For almost a century the Pacific Northwest has dominated the hops market, but with the help of some state laws farmers in the east are now trying to jump on board, reports CBS News correspondent Chip Reid.

Tom Barse, the owner of Milkhouse Brewery at Stillpoint Farm in Mt. Airy, Maryland, Barse recently harvested four acres of hops that he uses in his beer.

The hop is a flower and its oil gives beer its tangy taste and its aroma.

Hop bines can reach up to 18 feet high, which means cutting them down can be tricky. Barse performs a balancing act, riding on the top of a truck while cutting down the hop bines.

Barse was once a lawyer, and a high school teacher -- but he finally discovered his true passion.

"I don't like to leave the farm if I don't have to," he said, "It's like being on vacation every day."

He started growing hops eight years ago and sold to local breweries. Back then, it was his only choice.

In 2012, he helped persuade the Maryland legislature to pass a law allowing farmers to make and sell their own beer so long as some of the ingredients are grown on the farm.

He opened a small brewery on his farm and business went wild.

That money helps his farm survive and allows him to continue with less profitable operations, like raising his prized sheep for their wool.

What makes the business so profitable is the quality of his hops. He said they smell like "heaven, absolutely heaven."

It's not just Maryland where hops are booming. Fifteen states had their first documented harvests in almost 100 years.

New York passed a law to spur hops farming that requires a farm brew to use at least 20 percent New York-grown hops. In 2024 that requirement jumps to 90 percent.

With only about 250 acres of hops, many in the industry are questioning if supply of the hops will match the demand.

"I do think that we can keep up with the supply and demand," Istvan said, "But we just got to keep it going and by educating the farmers that they can grow hops."

In the 1800s, New York was the number one producer of hops in the country and number 2 in the world.

That history gives hope to farmers like Bradley Nagle who is learning from Istvan. Nagleis the head hops farmer at Obercreek Farm. They harvested a half acre of organic hops this fall.

"I think we can do something here...I think we'll be alright, and be back where we were 100 years ago," he said.

"Here in the Hudson Valley, I mean we believe our soil is some of the best soil in the world," he explained. "I mean I relate the Hudson Valley soil as, as the Tuscany of New York City," which is just 60 miles down the road.

But Riccobono said farmers need to have the resources to produce a healthy crop, including machinery. Istvan and Riccobono went into a co-op with other hops farmers for a new sorting machine this year.

"Now they can now really put some focus on their hop portion of their acreage and actually be able to get some good yields on it without having to spend a lot of labor and picking it," he said.

Nagle was able to use the machine for his harvest this year, last year he said was a lot harder.

"We spent about a week and a half of long days drinking beer, listening to the Grateful Dead, and picking hops all day. So it can be a very arduous process," he said.

When Istvan and Riccobono started, they reached out to two-dozen breweries for buy-ins and it worked, they received their backing. They all told the two they would be willing to pay more for local hops.

"If we can get the equipment, and to get the stuff processed and out to the brewers at a reasonable rate, I think it's really gonna be limitless," Riccobono said.

But back in Maryland, Barse said he prefers the intimacy of a small family farm.

"We have a specialty cash crop on a small scale, that can help a farmer increase his income, help support the family farm, get a few thousand dollars extra to put in his pocket so he can buy that pig...and I love that model. I think that's the model that will allow us to be successful in the East."

A model that allows him to stay close to the land and to his new crop of hops which he affectionately refers to as "his babies."