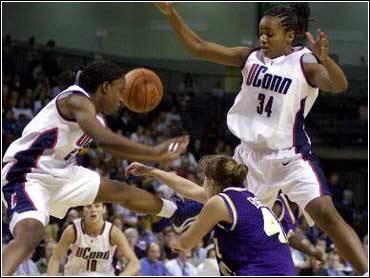 Geno Auriemma will have no trouble convincing his top-ranked Connecticut Huskies that winning the national championship won't be a snap.

LSU did it for him.

The Lady Tigers gave Connecticut its first scare of the NCAA tournament, keeping it close for much of the game before the Huskies pulled away for an 86-71 victory Monday night in the East Regional final.

"We really had to buckle down in the second half to make sure we were going to win," said All-American Shea Ralph, who had 15 points for the Huskies (34-1).

Connecticut, ranked No. 1 all season, will play Penn State on Friday in the national semifinals. Penn State beat Louisiana Tech 86-65 in the Midwest Regional final.

The Huskies had a 31.6-point average victory margin this season, and won their first three NCAA tournament games by a total of 131 points.

But some of the Huskies' swagger might have been diminished by the third-seeded Lady Tigers, who shot 73.9 percent in the first half and were down only 46-41 at the break

April Brown had 18 of her 25 points by halftime for LSU (25-7), making only its second appearance in the final eight.

"It was kind of frustrating knowing that we were shooting pretty good and couldn't find a way to get that lead," Brown said. "At halftime, we knew it came down to the defensive end."

All-American Svetlana Abrosimova led the Huskies with 25 points and was selected the regional's most valuable player. Sue Bird added 16.

"That last minute, I think it was starting to hit us that we were going to win and we were actually going to the Final Four," Ralph said. "It felt wonderful."

The Huskies used intense fullcourt pressure to get off to a quick start against the Lady Tigers. A 9-2 run gave UConn a 19-8 lead.

But the Lady Tigers' shooting, especially that of Brown, kept them close. Brown was 7-for-8 from the field in the half and hit all four of her 3-point shots, a big surprise after she shot 10-for-33 in her first 31 games.

"It's not your size, it's what's in your heart that matters," Brown said.

UConn is headed to the Final Four for the fourth time in nine years. Connecticut lost to Virginia in the national semifinals in 1991, won the 1995 title at 35-0 and lost to Tennessee in the semifinals the following year.

"It's a great feeling. I just can't describe it," Abrosimova said.

The Lady Tigers used the dazzling ball-handling of Ferdinand to minimize the Huskies' signature press. LSU made eight of its first nine shots and 16 of itfirst 20.

"We were knocking lights out, but they were hitting threes and we were hitting twos," LSU coach Sue Gunter said of the halftime deficit. "Going in at halftime down by five, I felt we were in pretty good shape considering what had happened."

The Huskies wore down the Lady Tigers in the second half.

"I think we finally ran out of gas," Gunter said.

UConn led 60-52 after Tamika Williams' putback with 12:02 left and scored 15 of the next 21 points. Ralph had seven points in the run, which ended with her 3-pointer from the corner that gave the Huskies their biggest lead at 75-58.