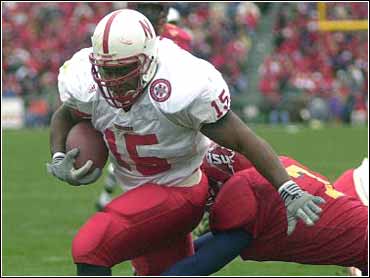 The Cornhuskers regained the top spot in a big way on Sunday, while one week at No. 1 was too much for Florida State, which tumbled to No. 7 in The Associated Press Top 25 poll following Saturday's 27-24 loss at Miami.

K-State made a power move, too, jumping ahead of Virginia Tech into the No. 2 slot and allowing the Big 12 Conference to become the first league to boast 1-2 teams since 1987.

With its first win over Florida State since 1994, Miami moved up three spots to No. 4, just behind No. 3 Virginia Tech, and gave the Big East Conference the 3-4 places in the poll.

"There's only about half of the season gone. We've got a lot of football to play," Solich said Sunday. "There's a lot of them dropping by the wayside as far as undefeated teams go."

Just seven of the 115 I-A teams are unbeaten and all are ranked within the top 12. Miami is the highest ranked team with one loss.

Florida, which beat LSU 41-9, gave the Southeastern Conference a Top 10 team again after last week's absence the first time since 1988 an SEC team was not ranked in the AP's Top 10.

Tennessee (2-3), which lost 21-10 to Georgia, fell out of the AP rankings for the first time since Dec. 4, 1994 a streak of 94 consecutive rankings. Joining the Vols on the dropout list were USC and Wisconsin, Arizona, Purdue and South Carolina are the new Top 25 teams this week.