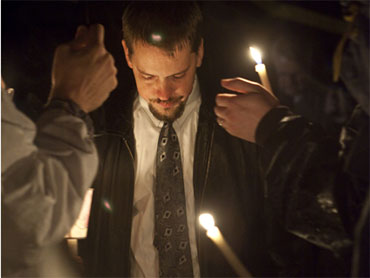 When Susan Powell, a young mother of two, went missing a year ago, her husband said she simply disappeared while he was camping with their two sons. Now, what he says is his theory of what happened to her has changed, and those close to her want to know why.

When Joshua Powell's 28-year-old wife disappeared in West Valley City, Utah, he initially claimed she vanished without a trace. Now, reports CBS News correspondent Jeff Glor, Josh Powell says she ran off on December 6, 2009 with another man -- who also disappeared around the same time.

Josh Powell claims his wife was home alone when he took their sons, then 2 and 4 years old, camping late at night in sub-freezing temperatures in the middle of a snowstorm.

After his wife's disappearance, Powell said of their camping trip, "You know, um, we got a pretty late start."

A Day In The Life Of A Show Dog

Powell replied, "No, it was later."

Investigators searching the site found no evidence of camping. In the days following the disappearance, Josh Powell was largely uncooperative in the search for his wife. Police soon named Powell a "person of interest" in the case.

Shelby Gifford, a family spokesperson, said in December 2009, "The fact that Joshua has been named a person of interest in this case saddens the family, but is not a surprise given the events and his reaction to them."

Now, after months of silence, Josh Powell has come forward with a new theory about what says he thinks might have happened to Susan. On his website, Powell, along with his father, say Susan may have run off to Brazil with a man named Steven Koecher, who vanished around the same time as Susan. Both families have refuted Powell's claim.

Pat Brown, a criminal profiler, said, "Josh and his father ... are trying to cast aspersions onto Susan. They're trying to come up with an alternative theory so police can stop looking at Josh. It's the most ludicrous theory I've ever heard."

Glor added that, just a month after Susan Powell disappeared, her husband moved back to his home state of Washington, and even though no arrests have been made, police say Josh Powell remains a person of interest.

On "The Early Show" Tuesday, Susan Powell's parents and sister-in-law told Glor they believe Josh Powell is hiding the truth.

Jennifer Graves, Josh Powell's sister-in-law, said, "I am quite certain that he's responsible for Susan's disappearance. I would like him to come forward and confess. You know. Let's stand up, take it like a man. He has done the deed -- whatever it was -- let's confess."

Charles Cox, Susan Powell's father, said, "I don't know where my daughter is. I can't do anything more than I have done. And I'm doing everything I can do to help find her. And there's a frustration of what is actually -- what did happen to her?"