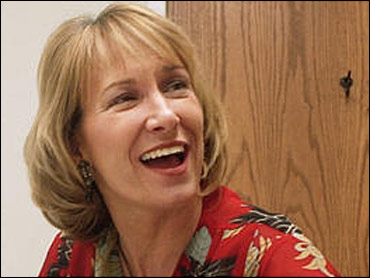 The husband of St. Louis radio personality and journalist Nan Wyatt has been charged with her murder.

Police say Thomas Erbland, 43, is being held without bail.

Her body was found Tuesday evening in a bedroom of her home in the St. Louis suburb of Twin Oaks. Police say she was shot several times with a .357-caliber Magnum handgun.

Police say the couple was having marital problems but that officers had never been called to the home.

The couple's 7-year-old son was home at the time of the shooting but was not injured. Police say that Erbland dropped the boy off at the home of Wyatt's parents, then called them to say something had happened.

He was picked up at a store as he tried to locate a police station to turn himself in, according to Belmar.

Since 1996, Wyatt has hosted the "Total Information A.M." program on KMOX. She was known for her in-depth political reporting, and had won several awards, including the National Associated Press Award for Enterprise Reporting.

Wyatt was also well-known in Chicago, where she worked from 1994 to 1996 at CBS Station WBBM-AM.

To those who worked with her, Wyatt is remembered as a charitable colleague who, as the station's go-to journalist, read voraciously to stay up to date on news, events and issues.

On Wednesday morning, the station paid tribute to Wyatt, with callers including longtime listeners and politicians.

"I am in shock. I just have a hard time believing it," said Karen Carroll, who recently stepped down as KMOX general manager. "Nan was the strength and backbone of KMOX News and always the first to pitch in any crisis. It is a shame."

St. Louis Mayor Francis Slay called Wyatt "one of the most gifted journalists I have ever known" - a tough interviewer but "always well-prepared, fair and professional."

"She used interviews to enlighten her audiences, not to embarrass her guests," Slay said. "She was more than a terrific reporter. People loved her because she was warmhearted, personable and loved St. Louis. I, along with her legion of fans and listeners, will miss her greatly."