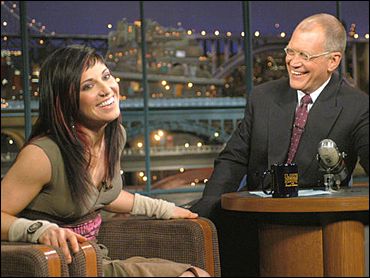 Last week, five-time X Games snowboarding gold medalist Tara Dakides was at the "Late Show with David Letterman" attempting to land a jump from a man-made snowboarding ramp set up in the street when the stunt went terribly wrong.

She fell 15 feet onto the pavement in front of a live audience and was knocked out cold. The accident so stunned Letterman - and the live audience - that he canceled the show.

Remarkably, Dakides returned to "The Late Show" Monday night. And on Tuesday she talked to The Early Show co-anchor Hannah Storm about accident and its aftermath.

"I consider myself real lucky. I'm glad I landed feet first," said Dakides, who received a mild concussion and five stitches in her head. "And some bumps and bruises on my butt and my back," she said. "You can tell I kind of fell backward."

From the very beginning, Dakides explained, she was having trouble getting enough speed to execute what is called the Backside 360 because the man-made ramp had softened up.

She said, "The first time I made it to a landing. And the second time, I know it's hard to explain but going into a backside, you turn into it and I turned a little much. Actually, the snow kind of gave away a little bit. I knew right when I went off the lip that I was going to have some problems. At that point, I was already committed, so I had to keep doing what I was doing. I'm glad I did because it was almost like I landed the trick but just in the street. At least I got feet first."

The 28-year-old snowboarder was taken to Bellevue Hospital, where she received an MRI and several stitches to the back of her head. She was discharged from the hospital on Friday but not without a visit from David Letterman himself.

Dakides said, "I was there overnight and he was there. He actually had to wait to see me for a little while because I was getting stitched up and I was having some reaction to the medicine they were giving me. But he's such a sweet guy and was real genuinely concerned. And everyone over there was real nice."

Letterman was not the only one who was concerned. Dakides said actress Drew Barrymore, also a guest of the "Late Show" that night, gave her a call to inquire about her recovery.

"She called and made sure I was OK. I scared so many people," said Dakides. "I was just shocked in general. That was a weird thing all around. I was surprised, one, that I did that, first of all. And then, you know, I had a lot of attention at the hospital."

Now that she is recovering, the female snowboarder nicknamed Terrorizor said this will not keep her from jumping again.

"Something like this doesn't stop me," she said. "This is a freak accident. I've had lots of injuries, like any sport out there. It comes with the territory. But I'll be out there real soon. And, you know, I wasn't wearing a helmet. I do wear helmets. I actually have a signature helmet. They actually sent me one in the mail the other day. I just was looking at this for a 20-foot jump."

Dakides had just re-entered competing after being out for two years because of an ACL injury, which resulted in a broken bone and nerve damage.

Dakides is gracing this month's cover of FHM magazine and she plans to go home and take some time off. She is competing in Queen of the Mountain, which is a competition that benefits the Boarding for Breast Cancer (BBC), something she has done for years.