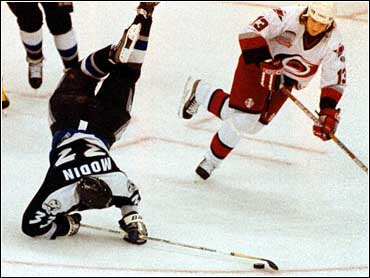 Winning against a team you're supposed to beat doesn't always come easy during a playoff chase.

"They play a hard style, and I'm sure they're a frustrated hockey club," Hill said of Tampa Bay, who were called for 11 penalties that at times slowed the game considerably.

Carolina moved within two points of the New York Rangers in the crowded race for the final playoff spot in the Eastern Conference.

"We know we have wasted some points early in the year," Carolina goaltender Arturs Irbe said. "Every game now is like the last game, the deciding game, Game 7, that's how we are approaching this."

Brind'Amour also assisted on Hill's goal for his first multi-point game since being traded for Keith Primeau on Jan. 23. Meanwhile, Hill, a defenseman, scored his fifth goal in as many games this season against Tampa Bay.

"It has been a long climb for us," Hill said. "We've played good the last 10 games here, but that doesn't do us any good now. You've got to go out the next game and get another win and keep building points. We have to play desperate hockey the whole way."

Carolina led 1-0 after one period, but jumped on the Lightning early in the second as Brind'Amour scored 16 seconds into the period.

"I thought we played a real good first period and then we got backed off the first shift of the second," Tampa Bacoach Steve Ludzik said. "The `Canes made the most of their chances."

"We buried those goals when we needed to, and that's big after being shutout against Montreal (Thursday)," Irbe said. "Every point is big now and we'll take them against anybody."

Vincent Lecavalier scored his team-leading 18th goal with 7:15 left in the second to close the gap to 3-1, but Gelinas scored his 11th from a sharp angle 1:25 later and the rout was on in a penalty-filled game.

Lightning goalie Rich Parent was caught out of position behind the net on Carolina's first goal as Jeff O'Neill centered a pass from the corner to Bates Battaglia, who put it into an open net 7:18 into the game. The goal was Battaglia's 11th, but only the second in his last 31 games.

Tampa Bay's Mike Johnson appeared to have stuffed one past Irbe during a power play later in the period, but after reviewing the play referee Paul Devorski said the entire puck had not crossed the goal line.