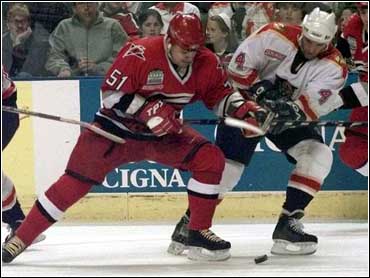 It was vintage Ron Francis.

Francis, who will turn 37 on Wednesday, threaded a pass through three Florida Panthers to find Jeff O'Neill wide open in front of the net and give the Carolina Hurricanes a 2-1 win in overtime Saturday night.

O'Neill scored a pair of goals, including the game-winner that beat Mike Vernon at 2:28 of the extra session, as the Hurricanes improved to 4-0-9 this season in overtime.

Both of O'Neill's goals were assisted by Francis.

"He knew I was open, I just had to put it in the net," O'Neill said. "He makes everything happen for me out there. We needed somebody to step up and make a big play tonight, and every night. It's a good start for our road trip."

The Panthers, who fell to 7-10-1 in their last 18 games, earned one point to remain four ahead of Washington for first place in the Southeast Division.

"We didn't look like a first-place hockey club," Panthers coach Terry Murray said. "They won all the loose-puck battles. They won all the races and all the board battles.

"We've got to change our mindset around here because we're not the hungry team that we were and we're not playing with the desperation, with any second or third efforts that you have to play with this time of the year."

Carolina kept Pavel Bure quiet again. Bure, who leads the NHL with 42 goals, got several shots Saturday but failed to score a point against Carolina for the second time this week.

The Panthers opened the scoring on Mike Wilson's third goal and first in 28 games.

Wilson, on his 25th birthdaytook a pass from Ray Whitney and unleashed a slap shot from just outside the left circle. The drive beat Arturs Irbe in the upper corner of the net at 10:49 of the first.

The Hurricanes tied it 1-1 in the second when O'Neill's backhander slipped through Vernon's legs. Laying on the ice, Martin Gelinas kept the puck in the offensive zone along the boards and pushed it out to Francis, who fed O'Neill just in front of the goal.

"We came out and threw everything at them," Carolina center Rod Brind'Amour said. "We don't have a choice. They obviously don't need the points like we do and I think that showed."

Carolina outshot Florida 22-13 through two periods and 29-19 in regulation.

"I would have had to hide myself if we hadn't have won the game with the way we dominated in the second period," Hurricanes coach Paul Maurice said. "We deserved to win that game. I would have hung myself if we lost that one. There was nothing more we could do."

Vernon played well for the second time in as many games against the Hurricanes. Florida beat Carolina 4-2 on Thursday.

Murray said he would alternate Vernon with Trevor Kidd, who returned last week from a shoulder injury. But Kidd remained on the bench Saturday night in favor of Vernon.

"It was frustrating. Vernon was awesome," O'Neill said. "He made some unbelievable stops. When he makes stops like that, you kind of think it could be his night."