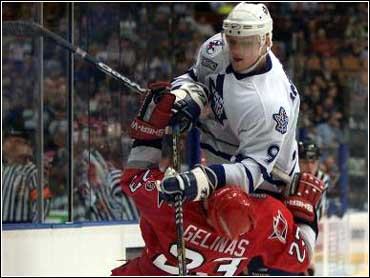 Recently it hasn't taken long for things to go badly for the Toronto Maple Leafs.

The Leafs fell behind by two Monday night for the 10th time in 13 games and lost 5-2 to the Carolina Hurricanes.

"We're lousy right now and we have to change it," coach Pat Quinn said of the Maple Leafs, who lost their fourth in a row for the first time under his direction.

"We could say maybe if we score first then everything is going to be alright, but it won't," Quinn said. "We have to get some confidence back and start doing the little things well."

"I think we played well. We beat the Islanders and Tampa and nobody gets too excited about that," Carolina coach Paul Maurice said. "It's good to see the guys get this one."

Carolina's Arturs Irbe made 20 saves, including stopping Kevyn Adams on a breakaway 4:02 into the third.

"It's a tough thing to swallow. You just have to get through it," enforcer Tie Domi said. "I don't have an answer. We're going through a tough time. Everybody cares here."

Wesley opened the scring for Carolina on a wide-open slap shot from the point that Curtis Joseph misplayed. Karpa also scored from the point.

Nik Antropov and Alexander Karpovtsev tallied for Toronto. Joseph, who has struggled since Christmas, had a dismal outing and stopped only 28 of 33 shots.

The Leafs cut it to 2-1 when Antropov converted a rebound off a Darcy Tucker shot at 5:37 of the first and Karpovtsev tied it midway through the period on a power play with a wrist shot from the point that fooled Irbe.

But the Hurricanes kept the pressure on as Francis deflected a shot in front and Brind'Amour made it 4-2 on Carolina's 10th shot.

Brind'Amour, who has struggled since coming over from Philadelphia for Keith Primeau, sneaked through three Leafs and put a nice deke on Joseph at 13:51 for his third point in nine games with the Hurricanes.

"He's just the complete player," Francis said. "It says it a lot that he's playing hurt for the hockey club, but he's done that his entire career. He's been a nice addition."

Francis snapped a shot past Joseph at 13:58 of the second, putting the game out of reach.

"We're in the fear stage," Quinn said. "A lot of guys didn't want it and were afraid of making mistakes.

"Unless we get some confidence back, we have to start doing the little things well. We're cheating so much. How many passes did we make tonight? Not too many."