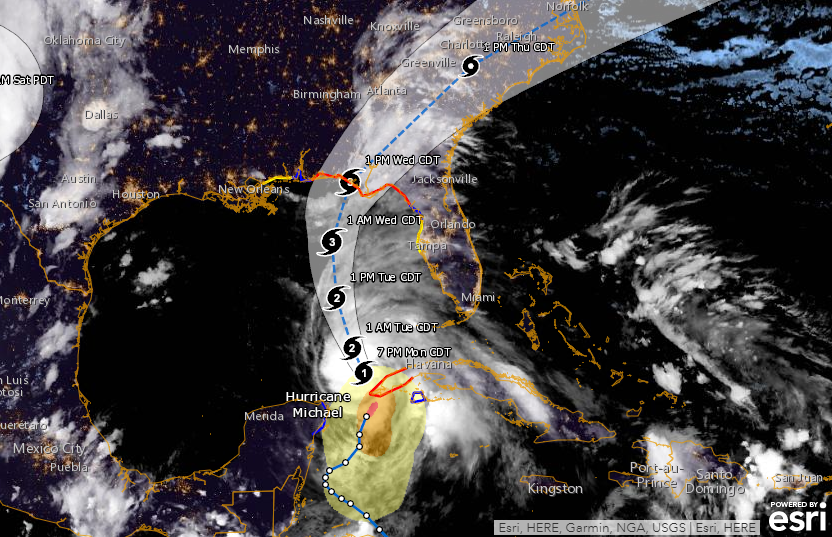 TALLAHASSEE, Fla. -- A tropical weather system rapidly strengthened Monday into Hurricane Michael Monday and is likely to keep growing stronger ahead of an expected strike on Florida's Panhandle by midweek, forecasters said. Florida and Alabama have both declared states of emergency. Michael was likely to strengthen into a Category 2 hurricane sometime Tuesday, meteorologist Danielle Niles of CBS Boston reports.

Michael could strengthen into a major hurricane, the term for storms reaching Category 3 and higher, with winds topping 111 mph by Tuesday night before an expected strike Wednesday on the Panhandle or Big Bend, according to the National Hurricane Center. The storm will spend two to three days over the Gulf of Mexico, which has very warm water temperatures and favorable atmospheric conditions.

Because of that, "there is a real possibility that Michael will strengthen to a major hurricane before landfall," Robbie Berg, a hurricane specialist at the Miami-based storm forecasting hub, wrote in an advisory. Michael's large size, strong winds and heavy rains could produce hazardous flooding along a stretch of Florida's Gulf Coast with many rivers and estuaries where seawater pushed ashore by a hurricane could get trapped, said Hurricane Center Director Ken Graham.

"This is a part of the Gulf of Mexico that is incredibly vulnerable to storm surge," Graham said. Parts of Florida's curvy Big Bend could see up to 12 feet of storm surge, while Michael also could dump up to a foot of rain over some Panhandle communities as it moves inland, forecasters said.

Hurricane Michael is a "monster storm"

Florida Gov. Rick Scott said Monday night Hurricane Michael is a "monster storm" and will be "the most destructive storm to hit the Florida Panhandle in decades." Storm surge can reach 8 to 12 feet and is "absolutely deadly" and "you can't hide form storm surge,"as Scott urged families to take the storm seriously and get prepared. Scott has added 700 more Florida National Guard troops to help in the storm preparation and response, bringing the number to well over 1,000.

"Keep your family safe, keep your pets safe," Scott said. "Now is the time to act ... I want to keep every family safe. Acting quickly and decisively is the most important thing we can do right now." He offered a website families can visit for resources.

Mandatory evacuation orders were issued for residents of barrier islands, mobile homes and low-lying coastal areas in Gulf, Wakulla and Bay counties. In a Facebook post Monday, the Wakulla County Sheriff's Office said no shelters would be open because Wakulla County shelters were rated safe only for hurricanes with top sustained winds below 111 mph.

With Michael's winds projected to be even stronger than that, Wakulla County residents were urged to evacuate inland. "This storm has the potential to be a historic storm, please take heed," the sheriff's office said in the post.

According to the 8 p.m. advisory Monday night, Michael's top sustained winds increased to 85 mph. The storm was located 60 miles north-northwest of the western tip of Cuba and about 485 miles south of Apalachicola, Florida, moving north at 12 mph. Hurricane-force winds extend outward up to 35 miles from the center and tropical-storm-force winds extend outward up to 175 miles, according to NHC.

The NHC said: "A northward to north-northwestward motion at a slightly faster forward speed is expected through Tuesday night, followed by a northeastward motion Wednesday and Thursday. On the forecast track, the center of Michael will move over the southeastern Gulf of Mexico Monday night, then move across the eastern Gulf of Mexico Tuesday and Tuesday night. The center of Michael is expected to move inland over the Florida Panhandle or Florida Big Bend area on Wednesday, and then move northeastward across the southeastern United States Wednesday night and Thursday."

Michael was lashing western Cuba late Monday morning with heavy rains and strong winds, according to the hurricane center. Forecasters warned that the storm could produce up to a foot of rain in western Cuba, potentially triggering flash floods and mudslides in mountainous areas.

A large mound of sand in Florida's capital city of Tallahassee, which is in the Panhandle, was whittled down to a small pile within hours as residents filled sandbags to prepare for potential flooding. A couple breweries in the city offered free filtered water to anyone bringing in growlers, jugs or other containers.

"All indications are that it's going to be severe," said City Commissioner Gil Ziffer, adding that if the storm hits Florida's capital, there would be significant tree damage and power outages. "Hopefully we will have no one hurt and no loss of life."

Closures and evacuations for Hurricane Michael

Tallahassee Mayor Andrew Gillum, who is the Democratic nominee for governor, had planned to campaign in South Florida on Monday and Tuesday, but he said he would return to the city to help with storm preparations. Gillum also says Michael's rapid strength has led city officials to hold a "sobering" discussion about the potential impact the storm will have on the area.

Gillum said Monday officials initially thought, "we will have outages and it will be inconvenient." He said, "Today it is about life and safety" -- noting that residents in the nearby coastal county of Wakulla were being forced to keep their shelters shut because they aren't built to withstand severe winds that may come from Hurricane Michael. "There's nothing between us and this storm but warm water and I think that's what terrifies us about the potential impacts," Gillum said.

Further west along Florida's Panhandle, the city of Pensacola tweeted to residents, "Be sure you have your emergency plan in place."

Ahead of the storm, Florida State University announced that it would shut down after midnight Monday and remain closed for the rest of the week. The school's main campus is in Tallahassee, and a satellite campus is in Panama City on the Panhandle's coast.

Leon County schools also canceled classes from Tuesday through Friday. Two years ago, Hurricane Hermine knocked out power for days in Tallahassee and caused widespread flooding as it came up through the Gulf Coast.

Ann Beaver was among the three-quarters of city residents who lost electricity after that storm, and she was preparing Monday for a similar experience. "I don't want to lose everything in the freezer, but it is what is," said Beaver as she loaded sandbags into her family's pickup truck.

Scott has issued an order for a state of emergency for 35 counties, from the Panhandle through Tampa Bay, to rush preparations, freeing up resources and activating members of the Florida National Guard. Aside from causing power outages, flooding and property damage, Michael could also worsen a toxic algae bloom that has plagued Florida's beaches for a year.

The red tide in the Gulf of Mexico off southwest Florida that began last October after Hurricane Irma swept up the state has killed massive amounts of marine life and caused respiratory irritations in people. The bloom has spread to Florida's Panhandle and the Miami area.

Tracy Fanara at Mote Marine Laboratory and Aquarium in Sarasota said the algae are "very vulnerable to turbulence" and the bloom could dissipate. However, Fanara said, Michael's strong winds also could stir up pollution and nutrients in the water that feed algae blooms.

Michael was expected to make landfall Wednesday in parts of the Panhandle where county jail inmates were enlisted last week to help clean up fish killed by the red tide.