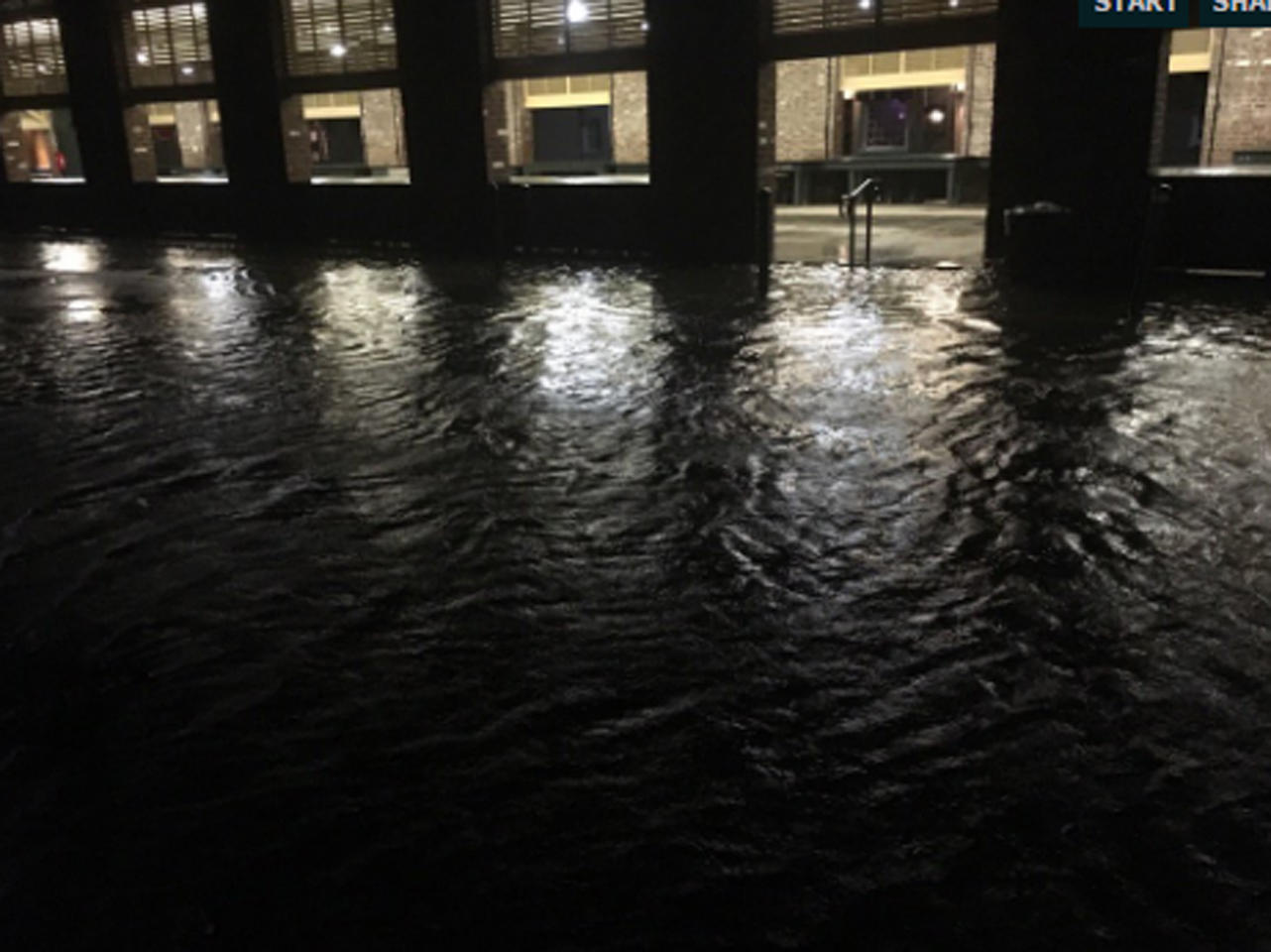 It was being blamed for at least four deaths in the U.S., all in Florida. At a briefing in Jacksonville Saturday morning, Florida Governor Rick Scott said about a million people in the state are still without electricity, though power has been restored to 725,000 homes.

“There’s a lot of flooding, a lot of downed trees, a lot of people without power,” Scott said. “This state’s a resilient place. We’ve got a lot of work to do, but this state’s going to come back.”

The Category 2 hurricane was forecast by the hurricane center to approach North Carolina’s southern coast by Saturday night.

“Although weakening is forecast during the next 48 hours, Matthew is expected to remain a hurricane while the center is near the coasts of South Carolina and North Carolina,” the center said at 5 a.m.

CBS Charleston affiliate WCSC reported, “The expected turn away from the coast has not occurred. A trough to the west of us to was expected to push Matthew to turn.”

Floodwaters hit downtown Charleston overnight, as seen in a retweet from the weather service Charleston office:

The hurricane center said Matthew was “expected to produce total rain accumulations of 8 to 12 inches over the Atlantic coast of the United States from eastern Georgia into eastern North Carolina and southeast Virginia, with possible isolated maximum amounts of 15 inches. This rainfall may result in life threatening flooding and flash flooding. Nearly 14 inches of rainfall has been measured thus far at Hunter Army Airfield in Savannah, Georgia.”

More than 100,000 homes and businesses were in the dark early Saturday in coastal Georgia as gusty winds strengthened and rain grew more severe. Some 150,000 customers were without power in South Carolina and more than a million in Florida.

Some of Georgia’s resort islands were expected to take the brunt of Matthew’s storm surge, including St. Simons and Tybee.

On Tybee Island, where most of the 3,000 residents were evacuated, Jeff Dickey held out hope that the storm might shift and spare his home. But as the rain picked up, he decided staying wasn’t worth the risk.

“We kind of tried to wait to see if it will tilt more to the east,” Dickey said. “But it’s go time.”

Mayor Jason Buelterman personally called some of the holdouts, hoping to persuade them to move inland.

“This is what happens when you don’t have a hurricane for 100 years,” he said. “People get complacent.”

Matthew spared Florida’s most heavily populated stretch from a catastrophic blow Friday but threatened some of the South’s most historic and picturesque cities with ruinous flooding and wind damage as it pushed its way up the coastline.

Among the cities in the crosshairs were St. Augustine, Florida; Savannah and Charleston.

“There are houses that will probably not ever be the same again or not even be there,” St. Augustine Mayor Nancy Shaver lamented as battleship-gray floodwaters coursed through the streets of the 451-year-old city founded by the Spanish.

Matthew – the most powerful hurricane to hit the Atlantic Seaboard in over a decade – set off alarm as it closed in on the U.S. after leaving hundreds dead in Haiti.

About 500,000 people were under evacuation orders in the Jacksonville area, along with another half-million on the Georgia coast. More than 300,000 fled their homes in South Carolina.

“If you’re hoping it’s just going to pass far enough offshore that this isn’t a problem anymore - that is a very, very big mistake that you could make that could cost you your life,” National Hurricane Center Director Rick Knabb warned.

Saturday morning, Gov. Scott said about 6,000 people remained in Florida shelters and that the highway patrol was working to help people return to their homes as soon as possible.

The National Weather Service in Charleston retweeted video of the storm taken overnight:

At least four people died in Florida. An elderly St. Lucie County couple died from carbon monoxide fumes while running a generator in their garage and two women were killed in separate events when trees fell on a home and a camper.

While the hurricane was weakening quickly, several northeastern Florida cities, including Jacksonville, were still in harm’s way, along with communities farther up the coast. Authorities warned that not only could Matthew easily turn toward land, it could also cause deadly flooding with its surge of seawater.

The storm gouged out several large sections of the coastal A1A highway north of Daytona Beach, and had nearly completely washed out the northbound lane for about a mile at Flagler Beach.

“It’s pretty bad, it’s jagged all over the place,” said Oliver Shields, whose two-story house is within sight of the highway.

St. Augustine, which is the nation’s oldest permanently occupied European settlement and includes a 17th-century Spanish fortress and many historic homes turned into bed-and-breakfasts, was awash in rain and seawater that authorities said could top 8 feet.

Historic downtown Charleston, usually bustling with tourists who flock to see the city’s beautifully maintained antebellum homes, was eerily quiet, with many stores and shops boarded up with plywood and protected by stacks of sandbags.

Matthew’s outer bands began lashing Savannah, a city that was settled in 1733 and has a handsome historic district of moss-draped trees, brick and cobblestone streets, Greek Revival mansions and other 18th- and 19th-century homes.

Matthew was expected to bring winds that could snap branches from the burly live oaks and damage the historic homes. And 8 to 14 inches of rain could bring some street flooding.

A small crew of workers Thursday set out to button up the Owens-Thomas house, one of Savannah’s architectural gems. The 1819 Greek Revival mansion serves as a museum.

Sonja Wallen, a curator, said antique rugs and furniture were moved away from the home’s more than 40 windows, many of them still with their original glass. Windows were fitted with plywood and other coverings, while sandbags were stacked at the basement entrance.

“It’s basically a lot of little details – sandbags and duct tape around doorways where water can get in,” Wallen said. “It’s pretty much the same stuff you would do for any home.”

Airlines canceled at least 5,000 flights Wednesday through Saturday, including many in and out of Orlando, where all three of the resort city’s world-famous theme parks – Walt Disney World, Universal Studios and SeaWorld – closed because of the storm.

But things began getting back to normal, with flights resuming in Miami and other South Florida airports.

In areas the storm had already passed, residents and officials began to assess the damage.

Robert Tyler had feared the storm surge would flood his street two blocks from the Cape Canaveral beach. Tree branches fell, he could hear transformers exploding overnight, and the windows seemed as if they were about to blow in, despite the plywood over them.

But in the morning, there wasn’t much water, his home didn’t appear to be damaged on first inspection, and his vehicles were unharmed.

“Overnight, it was scary as heck,” Tyler said. “That description of a freight train is pretty accurate.”