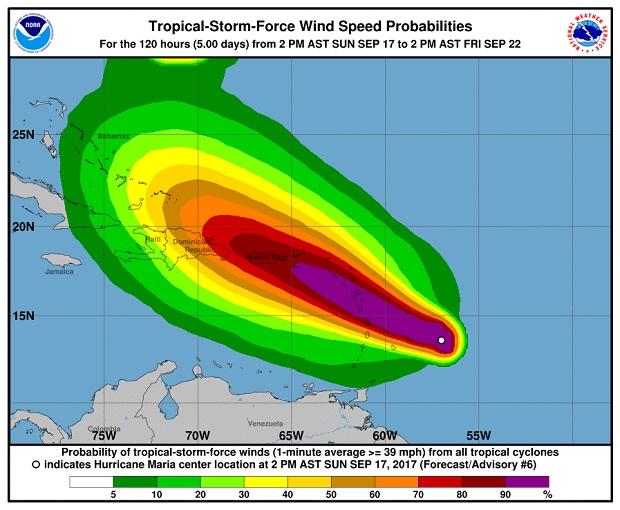 MIAMI -- Maria becomes a hurricane and is forecast to continue strengthening as it approaches the Leeward Islands, northeast Caribbean, according to officials.

The National Hurricane Center (NHC) released its 5 p.m. public advisory Sunday announcing that the storm is moving west-northwest at 15 mph with sustained winds of 75 mph -- and this motion with a decrease in forward speed is expected through Tuesday.

NHC also reports that the center of Maria will move across the Leeward Islands Monday night and then over the extreme northeastern Caribbean Sea on Tuesday.

Hurricane Maria is located about 140 miles east-northeast of Barbados and about 275 miles east-southeast of Dominica.

Meanwhile, long-lived Hurricane Jose was moving northward off the U.S. Atlantic Seaboard. The NHC says Hurricane Jose has sustained winds of 90 mph, according to its 5 p.m. public advisory. It is located 335 miles southeast of Cape Hatteras, North Carolina, and 415 miles west of Bermuda and is moving about 9 mph.

Forecasters say the storm is expected to cause dangerous surf and rip currents. Swells from the storm are affecting the Bahamas, Bermuda and much of the East Coast, according to the NHC.

While Jose is projected to weaken and veer away from any direct impact on the coast, the Hurricane Center said a minor shift could bring tropical-storm-force winds to North Carolina's Outer Banks or areas to the north.