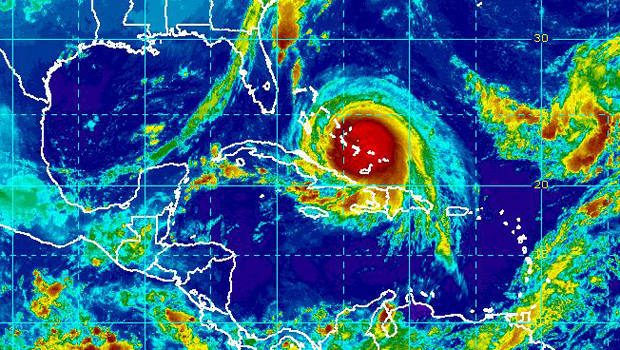 NASSAU, Bahamas -- Powerful Hurricane Joaquin bore down Thursday on the lightly populated islands of the central and eastern Bahamas, and forecasters said it could grow more intense while following a path that would near the U.S. East Coast by the weekend.

In the Bahamas, some minor flooding and storm surge were reported, but there were no immediate reports of casualties or significant damage as the storm reached the island chain, said Capt. Stephen Russell, the director of the Bahamas National Emergency Management Agency.

Islands such as San Salvador, Cat Island and Rum Cay were expected to be hit hardest before the storm begins an expected shift toward the north, forecasters said.

"Everyone is just trying to get their stuff battened down," said Frances Missick, chief councilor of Rum Cay, which has a population of about 100 and 40 homes.

Missick and other people on the small island gathered in a shelter set up at the St. Christopher Anglican Church. As of Thursday, there was only some minor flooding and power and water were still running.

Flooding was reported across parts of Long Island, but no one had been injured, said Parliament member Loretta Butler Turner.

"We will have to wait for the winds to die down before we can go out and really assess the damage," she said.

Joaquin was a Category 3 storm with maximum sustained winds of 125 mph and hurricane strength winds extending 45 miles from the eye, the U.S. National Hurricane Center in Miami said. As of 11 a.m. EDT, the center of the storm was passing over the uninhabited Samana Cays, Bahamas, and was moving southwest at 6 mph.

The storm was predicted to turn to the north and northwest toward the United States on Friday, but forecasters were still gathering data to determine how it might affect the U.S. East Coast, which was already suffering flooding and heavy rains from separate storms.

Chief weathercaster Lonnie Quinn of CBS New York station WCBS-TV reported on "CBS This Morning" Thursday that Joaquin was forecast to strengthen to a Category 4 storm as it turns north but then weaken to as low as a Category 1 storm as it approaches the East Coast.

The storm could make landfall anywhere from North Carolina to Massachusetts, Quinn reports, but there's also a possibility that it could go out into the Atlantic.

"There's still a distinct possibility that this could make landfall somewhere in the U.S.," said Dennis Feltgen, a meteorologist and hurricane center spokesman.

In New Jersey, Gov. Chris Christie declared a state of emergency ahead of the storm. He said it's too soon to know whether the hurricane will have a direct impact on the state, but warned of coastal flooding Friday and Saturday.

"It's important to note, for the all the residents, that they have to stay informed and watch the news, listen to radio," Christie said during a press conference on Thursday. "The team behind me are prepared for this, they've been through this before with Irene and Sandy."

Christie said he will consider evacuations if necessary, but that it's too early to know if that will be needed. The Republican presidential candidate canceled a campaign stop in New Hampshire that was scheduled for Friday.

New York Gov. Andrew Cuomo announced that he activated the State Emergency Operations Center in Albany on Wednesday to monitor the storm. He urged New Yorkers to exercise caution.

"As Hurricane Joaquin makes its way up the East Coast, New York is in a much better position today than we have ever been before, but when it comes to Mother Nature, you can never be too prepared," he said.

Gov. Pat McCrory declared an emergency for all of North Carolina as rain and wind from Hurricane Joaquin threaten to hit the state following days of soaking rain for much of the state.

McCrory said there are no evacuation orders. He said his declaration allows exceptions to weight and time restrictions on trucks while also giving him added authority to respond to trouble. The governor said the added rain from Joaquin could result in deadly flooding for a state that is nearly entirely under flood watches.

On Eleuthera, a narrow strip to the north of Cat Island, people removed stray coconuts and other debris from their yards and put up storm shutters in blustery winds, said Chris Gosling, who runs a volunteer ambulance service on the island. Islanders have learned from past storms not to take chances.

"People don't panic too much. There's nothing you can do about it. If it comes, it comes, and you do what you can," said Gosling, who has lived on Eleuthera for 27 years. "If the forecast is right we will get some wind and rain and it will go back out to sea."

The Hurricane Center said parts of the Bahamas could see storm surge raising sea levels 5 to 10 feet above normal, with 10 to 15 inches of rain falling on the central Bahamas.

The U.S. National Hurricane Center's long-term forecast showed the storm could near the U.S. East Coast along North Carolina and Virginia on Sunday or Monday.

"Residents of the Carolinas north should be paying attention and monitoring the storm. There's no question," said Eric Blake, a hurricane specialist with the center. "If your hurricane plans got a little dusty because of the light hurricane season, now is a good time to update them."

Storms in recent days have already caused misery in southwest Virginia and in other parts of the country. In Salem on Tuesday, 30 members of a water-rescue team removed 100 people from a low-lying apartment complex and trailer park.

To the west in Elliston, Shannon Sledd waited out the storm in the house she shares with her disabled parents and her two sons. Floodwaters up to 5 feet deep rose up to her front door, but didn't get inside.

"My mom and dad are really nervous," Sledd said. "We might have to get out."

One person died Thursday as heavy flooding submerged cars and closed streets in South Carolina, and the drenching storms were expected to move up the East Coast, a region already walloped by rain.

One man was rescued Thursday morning after his vehicle was swept off the road where a culvert had washed out, Doug Bryson with Spartanburg County Emergency Management told local news outlets. The man managed to cling to a tree and was taken to a hospital for treatment, though there was no immediate word on his condition.

Spartanburg County Coroner Rusty Clevenger said 56-year-old Sylvia Arteaga of Spartanburg died Thursday morning when her car was flooded. She was driving underneath an overpass just outside city limits when her car flooded "to capacity" inside.

In New England, downpours Wednesday led to flooding. Western Massachusetts got up to 5 inches in just hours, according to the National Weather Service. Rainfall totals topped 6 inches in Maine and 5 inches in New Hampshire, leading to flash flood warnings.

The University of Southern Maine canceled classes at its Portland, Gorham and Lewiston-Auburn campuses. More than 6,000 power outages were reported in Maine.

College student Krystal Diaz said her commute by bus to downtown Providence, Rhode Island, from nearby Johnston had been especially long because of poor visibility and heavy traffic.

"Buses were going slow," Diaz said. "I was late for one of my classes."