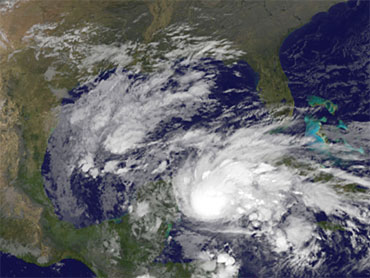 Hurricane Ida, the first Atlantic hurricane to target the United States this year, plodded Sunday toward the Gulf Coast with 105 mph winds, bringing the threat of flooding and storm surges.

A hurricane warning extended more than 200 miles of coastline from Pascagoula, Miss., east to Indian Pass, Fla. Tropical storm warnings and hurricane watches are in effect across other areas of southeastern Louisiana, Mississippi, Alabama and the Florida Panhandle, including New Orleans. Louisiana's governor declared a state of emergency.

Authorities said Ida could make landfall as early as Tuesday morning, although it was forecast to weaken by then. Officials and residents kept a close eye on the Category 2 hurricane as it approached, though there were no immediate plans for evacuations.

Sunday night, Ida was located 400 miles south-southeast of the mouth of the Mississippi River and moving north-northwest near 14 mph. The latest forecast from the National Hurricane Center shows Ida brushing near Louisiana and Mississippi, then making landfall near Alabama before continuing across north Florida.

Yet many residents took the forecast in stride.

"Even though we're telling everybody to be prepared, my gut tells me it probably won't be that bad," said Steve Arndt, director of Bay Point Marina Co. in Panama City, Fla.

In Louisiana, Gov. Bobby Jindal had declared a state of emergency as a precaution, and the National Guard was on high alert if assistance was needed. In Florida, residents of Pensacola Beach and nearby Perdido Key were encouraged to leave and school was canceled in the area Monday and Tuesday.

Officials told residents to prepare for potential gusts of 60 mph by removing any tree limbs that could damage their homes and securing or bringing in any trash cans, grills, potted plants or patio furniture.

"FEMA stresses that those in temporary (housing) units should not take chances," Federal Emergency Management Agency spokesman Andrew Thomas said. "Leave the unit behind and evacuate to a permanent structure that will better withstand tropical weather systems and the associated winds."

Mississippi authorities warned residents to be vigilant. Authorities were monitoring conditions to see whether any evacuations of lower-lying areas or school closures would be necessary.

"It is likely we will at least be hit with strong winds and some flooding in our coastal counties," said Jeff Rent, a spokesman for the Mississippi Emergency Management Agency. Officials "do not want anybody to be caught off guard."

Mississippi Emergency Management Agency Director Mike Womack said forecasts called for tides of 4-7 feet above normal and rainfall totals of 5-7 inches within 24 hours, which could mean flooding along the coasts and along rivers.

In the Florida Panhandle, residents in Bay County and Panama City were being advised to secure boats and prepare for storm surges that could reach 2-3 feet. Heavy rain, wind and possible flooding was also expected.

"You really don't know until it gets close how you're going to be affected by it," said Brad Monroe, Bay County's deputy chief of emergency services.

Ida wasn't expected to pack the wallop seen in 2008 when hurricanes Gustav and Ike pelted the Gulf Coast back-to-back. There have been nine named storms this season, which ends Dec. 1. Ida is only the third hurricane to form, and the other two did not threaten land.

In New Orleans, unflappable fans at the Saints football game seemed unaware a storm was approaching.

"We're used to tropical storms," said David Clements of Chalmette, La. "That's why we have a dome."

Earlier Sunday, Ida's wind and rain whipped palm trees in the Mexican resort city of Cancun. Fishermen tied their boats down, though tourists seemed to regard it as a minor setback.

"It's not what we expected," said Kathleen Weisser, a nurse from Fernley, Nev. "We wanted sun. Instead we have liquid sunshine."

Mexico had canceled all watches and warnings for the country.

Ron Kaczorowski, of Chicago, said his daughter was forced to move her beach wedding inside because of the storm. He said he had tried to reassure his disappointed daughter that the nasty weather would make her wedding stand out.

"I told her, 'How many people get married in a hurricane?"'