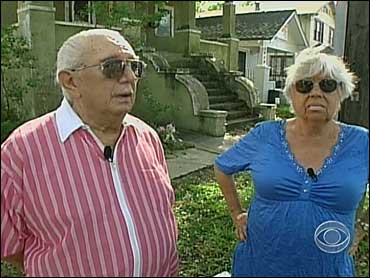 For Anthony Franz and wife Lucille, their house was a treasured family heirloom.

"I was born in 1929, and came to this house. This was my first home from the hospital," Anthony Franz told CBS News chief investigative correspondent Armen Keteyian.

Then in August 2005 Hurricane Katrina tore it apart, burying their home in more than 10 feet of water.

Now they are part of a potentially groundbreaking lawsuit centering on the Mississippi Gulf Outlet, a 76-mile waterway built by the Army Corps of Engineers in the 1960s. Known as the Mr. GO, it's a shortcut for ships between New Orleans and the Gulf of Mexico.

"It's the most expensive catastrophe in United States history. And it's actually man made," said Jonathan Andry, the plaintiffs' lawyer.

Attorneys for the victims will argue the Corps was negligent in constructing and maintaining the outlet, creating, in effect, a "Hurricane Highway."

First, wetlands and wooded forests that served as natural flood barriers were destroyed and a faulty design created a funnel effect, accelerating the force and strength of the storm surge - leading to the collapse of the levees and the drowning of the city of New Orleans.

"This wouldn't have happened if the Corps had done their job properly," said Ivor van Heerden of the LSU Hurricane Center.

There's also a question about whether the Corps ignored repeated warnings, like a 1957 report stating in a hurricane, the existence of the channel will be an enormous danger.

The government contends Katrina was an overwhelming event it had no control over. In addition, it argues the Corps is immune from liability for projects it constructs.

The complex trial before a single federal judge is expected to last upwards of a month. If the plaintiffs prevail, the floodgates could open for as many as 200,000 other victims of Hurricane Katrina.