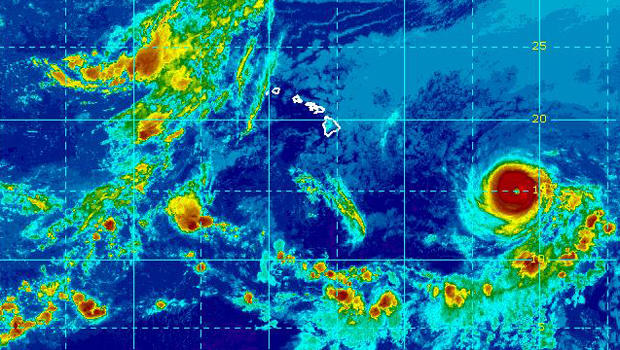 A strengthening Hurricane Hector continued heading for the central Pacific as a Category 4 storm. Early Monday, the hurricane had maximum sustained winds of about 145 mph, the Central Pacific Hurricane Center in Honolulu reported.

It was centered about 930 miles east-southeast of Hilo, Hawaii, and was moving west at about 15 mph. Hector posed no immediate threat to land, but forecasters said people in Hawaii should monitor the storm's progress as it was projected to pass just south of the islands by midweek.

"While the official forecast track continues to lie to the south of the Hawaiian islands, only a slight deviation to the north of the forecast track would significantly increase potential impacts to the state of Hawaii," according to the center's forecast. "Now is a good time for everyone in the Hawaiian Islands to ensure that they have their hurricane plan in place."

Meanwhile, two new tropical storms were strengthening off Mexico. Both were projected to reach hurricane force while marching northwestward parallel to the coast, bringing heavy surf.

John was centered about 340 miles southwest of the Mexican port of Manzanillo early Monday, with maximum sustained winds of about 70 mph. It was moving west-northwest at about 8 mph.

The storm was forecast to peak as a Category 3 storm before starting to weaken. It was expected to stay to the west of the Baja California Peninsula during the week.

Closer to shore was Ileana, which was centered about 245 miles southeast of Manzanillo. It had maximum sustained winds of about 65 mph and was heading northwest at about 17 mph.

Ileana had a potential to brush Mexico's southwestern shoulder as a hurricane along the coastal area near Manzanillo early Tuesday, with the possibility for heavy rains and flash flooding. Authorities posted a hurricane watch from Punta San Telmo in Michoacan state to Playa Perula in Jalisco state.

It was projected to weaken later Tuesday due to its proximity to the larger storm, John.