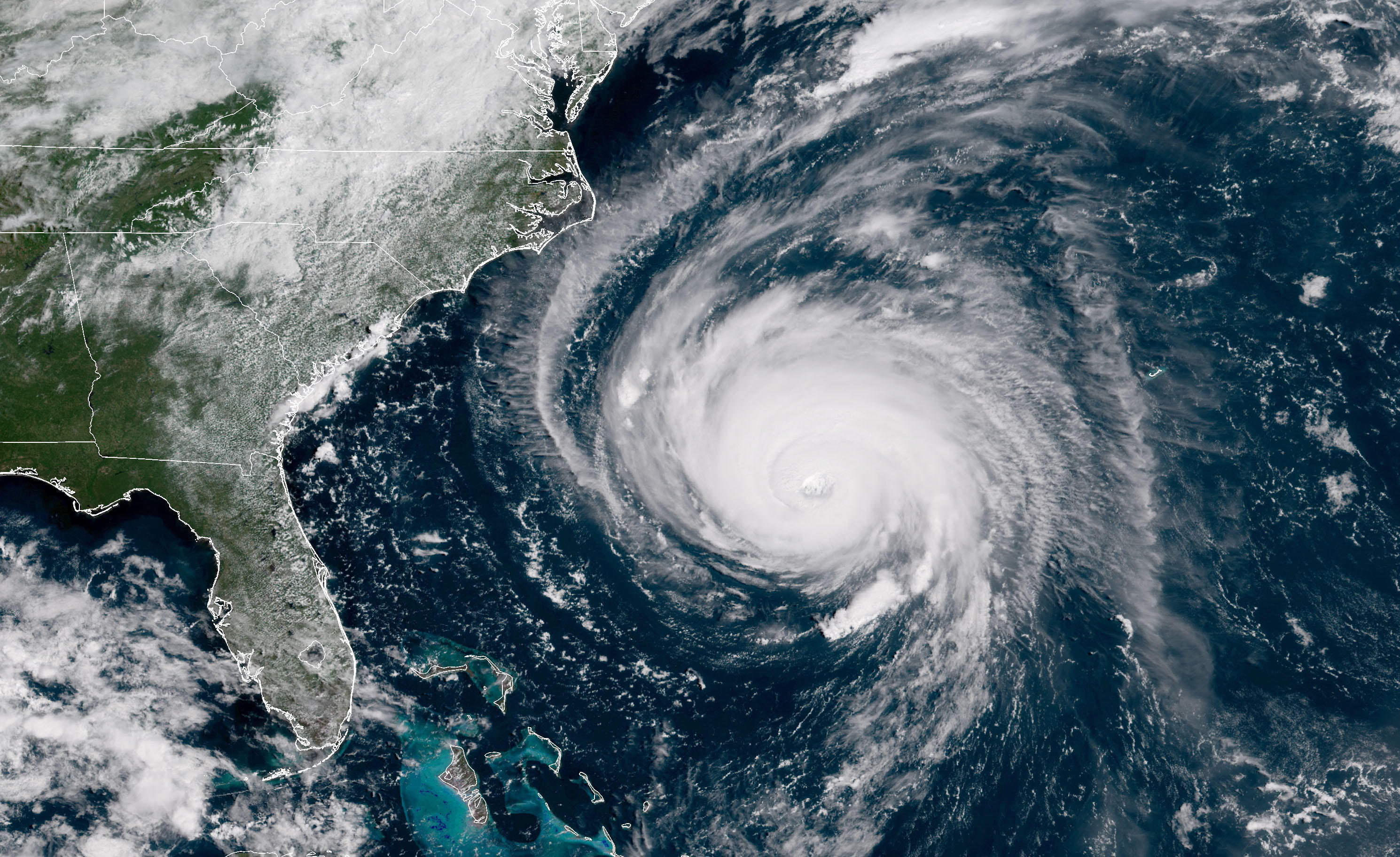 WILMINGTON, N.C. -- Communities along the Carolina coast prepared for the onslaught of Hurricane Florence as forecasters Wednesday warned that the monstrous storm could hesitate just offshore for days -- punishing a longer stretch of coastline than previously feared -- before pushing its way inland.

The National Hurricane Center's projected track had Florence hovering off the southern North Carolina coast from Thursday night until landfall Saturday morning or so, about a day later than previously expected. The track also shifted somewhat south and west, throwing Georgia into peril as Florence moves inland.

On Wednesday afternoon, Georgia's governor declared a state of emergency.

"In light of the storm's forecasted southward track after making landfall, I encourage Georgians to be prepared for the inland effects of the storm as well as the ensuing storm surge in coastal areas," said Gov. Nathan Deal.

North Carolina officials said they are closing the Ports of Wilmington and Morehead City to commercial truck traffic Wednesday. Both facilities will be closed to traffic of any kind starting Thursday.

South Carolina State Ports Authority spokeswoman Erin Dhand says the Port of Charleston is closing to container traffic Thursday and may re-open Sunday, depending on the storm's track and overall conditions.

No storm watches or warnings are in effect for Georgia. But forecasters said there is an increased chance for tropical storm winds to reach Savannah.

On Wednesday evening, the storm was centered 335 miles (540 kilometers) southeast of Wilmington, North Carolina, and about 370 miles (595 kilometers) east-southeast of Myrtle Beach, South Carolina. The Category 3 storm is moving at about 16 mph with maximum sustained winds of 115 mph (185 kph), according to the NHC's 8 p.m. ET advisory.

The center said life-threatening storm surge and rainfall is expected.

"On the forecast track, the center of Florence will move over the southwestern Atlantic Ocean between Bermuda and the Bahamas tonight, and approach the coast of North Carolina or South Carolina in the hurricane warning area on Thursday and Friday, and move slowly near the coastline through Saturday," the center said Wednesday.

The National Hurricane Center said some fluctuations in the strength of the storm will be possible through Thursday morning.

"Although slow weakening is expected to begin by late Thursday, Florence is still forecast to be an extremely dangerous major hurricane when it nears the U.S. coast late Thursday and Friday," it said.

The overall trend is "exceptionally bad news," said University of Miami hurricane researcher Brian McNoldy, since it "smears a landfall out over hundreds of miles of coastline, most notably the storm surge."

Duke Energy said damage from Florence could cut off electricity to three-quarters of its 4 million customers in North and South Carolina, and the outages could last for weeks. The country's No. 2 power company said Wednesday that it is anticipating 1 million to 3 million homes and businesses could lose power for lengthy periods, depending on the storm's track.

Duke Energy North Carolina President David Fountain said Florence is so massive and its potential for damage so extensive that people could be without power for a very long time. Fountain said most storms are an inconvenience, "but Hurricane Florence will be a life-changing event for many people here in the Carolinas."

The company said it is already shifting thousands of power workers from its Midwest and Florida regions and getting added workers from as far away as Texas.

"This is not going to be a glancing blow," Jeff Byard, an administrator with the Federal Emergency Management Agency, warned. "This is going to be a Mike Tyson punch to the Carolina coast."

With South Carolina's beach towns more in the bull's-eye, Ohio vacationers Chris and Nicole Roland were trying to time their evacuation from North Myrtle Beach to get the mainland.

"It's been really nice," Nicole Roland said. "Also, a little creepy. You feel like you should have already left."

South Carolina Gov. Henry McMaster said Wednesday that more than 300,000 people had evacuated the state's coasts ahead of Florence. He said the storm could bring more rain to the state than 1989's devastating Hurricane Hugo.

Forecasters warned as much as 15 inches could fall in some portions of the state through at least Monday. Officials are concerned about the potential for widespread flooding, particularly in the northeastern part of the state, said an official from South Carolina's Department of Natural Resources. Alvin Taylor said Wednesday that the area of concern includes the town of Nichols, a small community that experienced devastating flooding following Hurricane Matthew in 2016.

As of Tuesday, more than 10 million residents in three states are under a storm watch or warning, according to the National Weather Service (NWS). There are 5.25 million people under hurricane warnings and watches and another 4.89 million under tropical storm watches and warnings.

Some said they planned to stay put, but many weren't taking any chances. Steady streams of vehicles full of people and belongings flowed inland Tuesday as North Carolina Gov. Roy Cooper tried to convince everyone on North Carolina's coast to flee.

"The waves and the wind this storm may bring is nothing like you've ever seen. Even if you've ridden out storms before, this one is different. Don't bet your life on riding out a monster," he said.

Cooper says at least 50 shelters are open across the state as up to 1 million residents have been asked to evacuate ahead of the storm. He announced that officials were opening a large shelter at the Lawrence Joel Veterans Memorial Coliseum in Winston-Salem at 6 p.m. Wednesday with a capacity of at least 1,000.

Hurricane Florence could inflict the hardest hurricane punch North Carolina has seen in more than 60 years. In 1954, the state was hit by a Category 4 storm, Hurricane Hazel.

"Hazel stands as a benchmark storm in North Carolina's history," said Jay Barnes, author of books on the hurricane histories of both North Carolina and Florida. "We had a tremendous amount of destruction all across the state."

President Trump: Hurricane Florence is "a big one"

President Trump is urging those in Florence's path to act now to "get out of its way."

"Don't play games with it. It's a big one," he told residents.

In a videotaped message from the Rose Garden, he said the federal government and first responders stand ready to assist, but even so, "bad things can happen when you're talking about a storm this size."

Mr. Trump has declared states of emergency for North and South Carolina and Virginia, opening the way for federal aid. All three states ordered mass evacuations along the coast.

West Virginia agencies are mobilizing to respond to problems arising from the storm. The governor's office says in a new release the Division of Homeland Security and Emergency Management activated its emergency operations center Wednesday. The statement says 50 National Guard members are prepared to assist in locations across the state.

Nearly 70 tractor-trailer loads of supplies have arrived at the Guard's 167th Airlift Wing in Martinsburg. In June 2016, a series of thunderstorms pelted a wide swath of West Virginia. Nine inches of rain fell in 36 hours in some areas, leaving 23 dead statewide and destroying thousands of homes, businesses and infrastructure.

The NWS forecast says up to 4 inches of rain is possible in parts of the state through next week.

Getting out of harm's way has proved difficult since airlines were canceling flights and motorists had a hard time finding fuel.

Flight-tracking service FlightAware said Wednesday that it was starting to see airlines file cancellations for airports in Florence's path. As of early afternoon, total cancellations within, into, or out of the U.S. on Wednesday was 230, while 505 flights were cancelled for Thursday, it said.

"We got a long trip," Phillip Payne told Begnaud as he packed up his truck for the drive to Charlotte Tuesday with his fiance and two dogs. "It's definitely been a learning experience, but we're definitely getting out of here. Better safe than sorry."

Long lines formed at service stations, and some started running out of gas as far west as Raleigh, with bright yellow bags, signs or rags placed over the pumps to show they were out of order. Some store shelves were picked clean.

"There's no water. There's no juices. There's no canned goods," Kristin Harrington said as she shopped at a Wal-Mart in Wilmington.

South Carolina said Wednesday night that it is planning to end the reversal of some interstate lanes that were switched to help move people away from the state's coast. Department of Public Safety Director Leroy Smith told reporters that, starting Thursday at 6 p.m., officers will close Interstate 26 lanes that had been switched from eastbound to westbound to move people away from the Charleston area toward the center of the state.

Many officers are on the road during lane reversals, manning each exit and ensuring drivers don't drive around barricades. The change allows agencies like Smith's to pull back their officers when tropical storm-force winds are expected to arrive in the state.

People weren't the only ones evacuating to get out of the path of Hurricane Florence. Eight dogs and 18 cats from a shelter in Norfolk, Virginia, were sent to two shelters in Washington to make room for pets expected to be displaced by the hurricane.

The coastal surge from Florence could leave the eastern tip of North Carolina under more than 9 feet  -- 2.75 meters -- of water in spots, projections showed. The Navy, Air Force and Army were moving ships and aircraft out of harm's way. Thousands of Marines and their families evacuated from Camp Lejeune, leaving the rest to dig in ahead of what could be a direct hit.

The NWS said Florence "will likely be the storm of a lifetime for portions of the Carolina coast." That's saying a lot given the impacts from Hurricanes Diana, Hugo, Fran, Bonnie, Floyd and Matthew.

Four storms churning in the Atlantic

Florence is the most dangerous of four tropical systems in the Atlantic. Tropical Storm Isaac was expected to pass south of Puerto Rico, Haiti, the Dominican Republic and Cuba, while Hurricane Helene was moving northward away from land.

NHC announced Wednesday night that they are now monitoring a fourth storm in the Atlantic, which they have named Subtropical Storm Joyce. It has maximum sustained winds of 45 mph (75 kph) and is expected to become a tropical storm and to strengthen by Thursday. Joyce is centered about 870 miles (1,400 kilometers) southwest of the Azores and is moving southwest at 6 mph (9 kph).

Federal officials begged residents to put together emergency kits and have a plan on where to go.

He said Wednesday it was imperative that locals heed evacuation warnings and that the time to flee Florence is now.

"Today's the day," he said. "It's time for our citizens to be a part of the team. Heed those warnings and evacuate if you're in one of the zones."