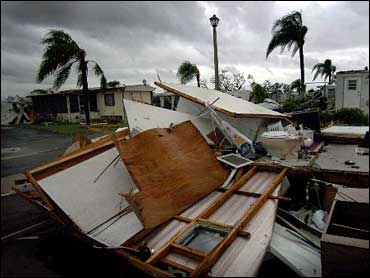 A stronger-than-expected Hurricane Charley roared ashore Friday as a dangerous Category 4 storm, slamming the heavily populated Gulf Coast with devastating storm surges and 145 mph wind that snapped trees in half, ripped roofs off buildings and knocked out power to hundreds of thousands of people.

The hurricane struck west-central Florida at Charlotte Harbor with a wicked combination of water and wind. A surge of sea water reached up to 15 feet high, the National Hurricane Center said. Winds blew off the roof of a hurricane shelter where 1,200 people had gathered and tore apart small planes at the Charlotte County airport.

Two traffic deaths were reported in Florida. Earlier, Charley had been blamed for three deaths in Cuba and one in Jamaica.

Gov. Jeb Bush said damage could exceed $15 billion but cautioned it was a preliminary estimate as the storm headed across the center of Florida toward the Orlando area. President Bush declared the storm-battered region a federal disaster area.

Airports and theme parks hurriedly closed before the storm arrived, the Kennedy Space Center sent workers home early, and storm shelters quickly filled up as nearly 2 million people were told to flee ahead of the strongest storm to hit Florida in a decade.

veering to the right
at the last moment, bring it ashore 70 miles south of the Tampa Bay area, where more than 2 million had been urged to evacuate.

"Our prayers are with you and your families tonight," the president said in Seattle.

"This is the nightmare scenario that we've been talking about for years," hurricane center Director Max Mayfield said of storm surges that ranged from 10 to 15 feet.

The storm could mimic the path of Hurricane Donna, a 1960 hurricane swept across Florida from west to east, and then turned north and hit nearly every state on the East Coast from South Carolina to New England, reports CBS News Anchor Dan Rather.

Charley's eye reached land at 3:45 p.m. EDT when it passed over the barrier islands between Fort Myers and Punta Gorda, some 70 miles southeast of the Tampa Bay area. It struck the mainland 30 minutes later.

"Happy Friday the 13th," said Don Paterson of Punta Gorda, who tried to ride out the storm at his mobile home but got beaned by a flying microwave oven as his home was demolished. His refrigerator fell on him, and he spent the rest of the storm sheltering behind a lawnmower.

As an airplane hangar at the Charlotte County airport flew apart around him and his wife, "it sounded like a calypso band gone crazy," said Jim Morgan.

"There was crap flying around there — It looked like the inside of a blender," said Morgan, 66. "If you want to meet your maker, I got close on that round."

In Arcadia, 20 miles inland, the roof blew off at a civic center serving as a shelter for 1,200 people. At least one person suffered minor injuries.

The roof "started peeling back," said Alida Dejongh. "It lifted and you could just see more and more light. You could hear this popping and zipping noise like a giant Ziploc bag."

At 9 p.m., the center of the hurricane was 15 miles south-southwest of Orlando, moving north-northeast near 25 mph and gaining speed. Maximum sustained winds had decreased to near 115 mph with higher gusts, with further weakening expected.

Charley was forecast to strike the Daytona Beach area before reaching the Atlantic Ocean, where it could regain strength. Rain totaling 4 to 8 inches was expected along Charley's path, creating the risk of flash flooding.

Tornado watches were issued for a wide swath of southwestern and central Florida. Small tornadoes associated with the hurricane were reported in Osceola County southwest of Orlando and Highlands County northwest of Lake Okeechobee, with no damage reported. Flights were halted at Orlando International Airport.

Orlando theme parks, including Walt Disney World, Universal Orlando and SeaWorld Orlando, had closed by early afternoon and Disney's Animal Kingdom did not open at all. The only previous time that the parks closed for a hurricane was in 1999 for Floyd. Guests remaining at hotels were urged to stay in their rooms.

On the state's Atlantic coast, 10 Navy ships from Mayport Naval Station near Jacksonville were sent out to sea, the Navy said Friday. At Cape Canaveral, traffic was bumper-to-bumper at noon as Kennedy Space Center employees left work early. All but a skeleton crew of 200 of the center's nearly 13,000-person work force was sent home, or told to stay home, and the space shuttle hangars and the massive Vehicle Assembly Building were sealed tight.

About 340,000 homes and businesses were without power in southwest Florida, said Kathy Scott, spokeswoman with Florida Power & Light. That number was expected to grow as Charley cut across the state.

The storm was almost on par with Hurricane Andrew, which smashed into South Florida in 1992 with 165 mph wind, killed 43 people and caused $31 billion in damage.

It even affected the nerve center of the war in Iraq, MacDill Air Force Base, where residents evacuated and only essential personnel remained.

Amtrak canceled long-distance service between Miami and New York for Saturday, and trains coming from Los Angeles were stopping at New Orleans instead of continuing on to Orlando.

Charley was the strongest hurricane to hit Florida since the Category 5 Andrew hit south of Miami in 1992. Hurricane Mitch, which stalled over Honduras in 1998, also was Category 5 with sustained wind over 155 mph. Mitch killed some 10,000 people in Central America.

Charley was expected to slide along Georgia's coast. Farther north, hurricane warnings and watches were raised along the South Carolina coast.