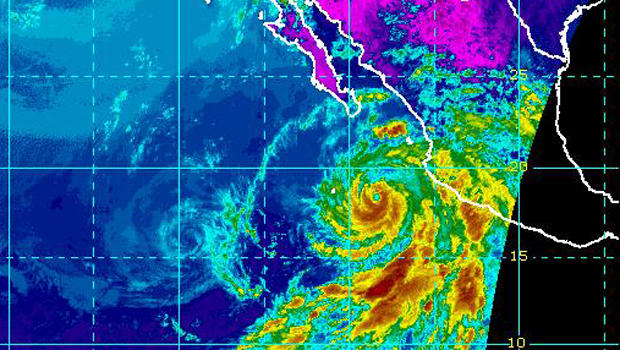 MEXICO CITY -- Hurricane Bud weakened slightly and was once again a Category 3 storm off Mexico's Pacific coast on Tuesday. Earlier it had just barely crossed the threshold of wind strength to be classified a Category 4 storm.

Forecasters said they expected cooler waters to rob most of its punch before a potential collision with resorts on the southern Baja California Peninsula.

The U.S. National Hurricane Center said Bud had maximum sustained winds of 125 mph and was centered about 325 miles south-southeast of Cabo San Lucas at the peninsula's southern tip.

The hurricane center said the storm was about 225 miles southwest of Cabo Corrientes, near Puerto Vallarta.

Bud was moving toward the northwest at about 6 mph and was forecast to approach Baja California Sur on Thursday as a tropical storm.

"Further weakening, possibly rapid at times, is expected during the next 48 hours, and Bud is forecast to weaken below hurricane intensity by Wednesday night," the center said.

The center said the hurricane still could generate dangerous surf and rip currents over the coming days, with heavy swells reaching the peninsula later Tuesday.

Rainfall of 3 to 6 inches, with isolated patches of 10 inches, was possible over much of the region.