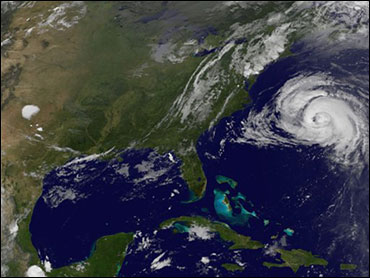 Forecasters have downgraded Bill to a Category 1 hurricane as it nears the U.S. coast, but tropical storm watches and warnings are still in effect for the Massachusetts coast and parts of Canada.

Bill was churning up rough seas, creating dangerous rip tides and closing beaches to swimmers up and down the eastern seaboard, including President Obama's vacation spot, Martha's Vineyard.

It was expected to pass the mainland well off New England, but was still packing high winds and waves that had safety officials urging extreme caution.

Bermuda is still recovering from torrential downpours that have battered the tiny island, as Hurricane Bill roared offshore, causing flooding and generating 35 foot high waves. The first hurricane of the season continues to move north off the U.S. coast today. Bill is not expected to hit land but is expected to create dangerous, deadly rip currents. Officials began closing beaches in its path Friday.

"Concern is if the surf is much bigger," one official said.

Winds clock in now at 105 mph, but the damage it caused earlier this week is still being felt up and down the coast.

"When the storm was well out over the Atlantic, it was a category 4. It takes a while for that wave action to eventually reach the coastline," said David Bernard, a meteorologist for CBS News station WFOR in Miami.

Waves may go up to 23 feet in Massachusetts.

The storm was expected to reach Canadian waters early Sunday, and the Canadian Hurricane Center on Saturday issued a hurricane watch for areas of Nova Scotia, where wind speeds could hit 74 mph with gusts of 87 mph.

At Robert Moses State Park in New York, the beach was shut down as the high tide submerged the sand, though the beach opened later Saturday for sunbathing. Along some beaches in Delaware and New Jersey, no swimming was allowed.

At mid-afternoon Saturday, the storm was about 370 miles south of Nantucket and losing strength as it moved over cooler waters, according to the U.S. National Hurricane Center in Miami. But the storm was still carrying maximum winds of 100 mph.

A tropical storm warning was issued Saturday for Massachusetts, including the islands of Nantucket and Martha's Vineyard, meaning tropical storm-force winds of 40 mph or more could hit the coastline in the next 24 hours.

The worst of Bill was expected to pass about 150 to 200 miles east of Martha's Vineyard before President Obama's scheduled arrival on Sunday, and there was no word from the White House that the Obamas were changing vacation plans.

On Saturday, nearly all south-facing beaches on the island were closed to swimmers and large signs blocked roadways to shorefronts. Meanwhile, lifeguards used caution tape to rope off access points, and police patrolled the beach to enforce the closings.

"The concern we have now is that the riptides are very strong," said lifeguard James Costantini. "There's a very strong undertow."

Longtime Vineyard vacationer Jack DeCoste, 69, of Plymouth, Massachusetts, was unimpressed with the storm as he lounged in a beach chair in Edgartown.

"I don't think it's going to impact things that much," DeCoste said. "I think it'll be in and out of here fairly quickly."

The high waves that worried safety officials had surfers buzzing. Scott Fisher, 38, was at Nantasket Beach in Hull, where the morning's moderate waves were expected to build throughout the day.

"People wait all summer for this," he said.

About 200 people were evacuated as a precaution from an offshore natural gas production platform off Nova Scotia, said Exxon Mobil spokesman Merle MacIsaac.

In Nova Scotia, provincial parks have been shut down and people advised to stay clear of beaches.

"The waves, they're very pretty to look at but very dangerous," Barry Manuel of the Halifax Emergency Management Office said Saturday.

The stormy conditions were expected to last through the weekend in the northeastern U.S.

"It takes a while for the ocean to relax" after strong storms, said Gary Conte, a meteorologist with the National Weather Service. "Until it does, riptides will make dangerous sport" for surfers and swimmers.

The storm mostly spared the pink-sand shores, though it cut power to about 3,700 customers and flooded some roads along the northern coast. The airport was closed overnight and expected to reopen Saturday afternoon. All ferry service was canceled until Sunday.

Bermudians and tourists awoke to some water on the roads, rain and gusting winds.

"It was something to behold. I've never been in a hurricane before," said ESPN sportscaster Kenny Mayne, who hoped to return to the U.S. on Sunday.

A government spokeswoman said the British territory's hospitals had no storm-related patients.