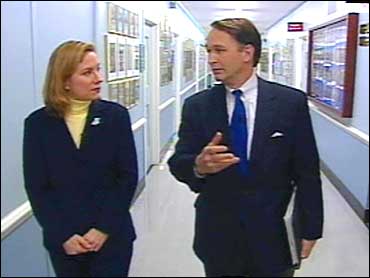 After the 1991 Gulf War, thousand of American soldiers returned home complaining of symptoms that came to be known as "Gulf War Syndrome."

With American troops once again fighting in the Persian Gulf, many are concerned the symptoms may reappear. The Early Show medical correspondent Dr. Emily Senay explains that health experts are trying to get to the bottom of the puzzling illness and prevent it from happening again.

"I looked at him and I was like, 'Doc, this is not right,'" remembers Ronald Dowtin, a Gulf War veteran. "He was like, 'Yeah, this isn't right. Something is definitely going on with you.'"

Two years after returning from the war, Dowtin first heard of Gulf War Syndrome. His fellow veterans were complaining of muscle twitches, muscle cramps, night sweats, loss of appetite and loss of weight.

Medical experts still don't know why nearly 20,000 Gulf War veterans have these and other symptoms. And few records were kept of soldiers' movements during the war, leaving researchers to guess at what kind of chemicals or toxins were on the battlefield. Even records of vaccines and pills given to soldiers were often incomplete.

"We did not have a good baseline of information during the prior Gulf War," says Dr. William Winkenwerder, Assistant Secretary of Defense, Health Affairs. "We also had some problems in terms of surveillance of medical care."

Winkenwerder is the Pentagon's top doctor, and he says this time extensive records will be kept.

"We also collect a blood sample, a serum sample and that's stored," he says. "We have about 30 million such blood samples today. And then we can go back and look and compare from pre-deployment to post-deployment to assess any blood chemistry changes or toxological changes."

Oil fires, pesticides and sandstorms can also pose health threats so scientists will be stationed on the battlefield during the war.

The government says one thing they are not sure of as the cause of Gulf War Syndrome is uranium ammunition. There are soldiers who still have some shrapnel pieces inside them because it made sense medically to leave them there. The pieces are made of depleted uranium and these soldiers have been tested for adverse effects. However, no link has been found.

Ronald Dowtin, a specialist in the first Gulf War, says he believes that he was exposed to a bio-chemical agent. Years later, he received a letter from the Department of Defense saying he may have been exposed to very low levels of chemical agents during the demolition of Iraqi weapons by U.S. forces.

"It took the government so long to come out and say that they acknowledged our illness," says Dowtin, whose symptoms that persists to this day. "I believe in our government wholeheartedly, I really do. But we were solders. You asked us to go. We went. When we came back sick you didn't want to listen to us."

Michael O'Rourke is head of health policy for the Veterans of Foreign Wars and is determined to make sure things are different now.

But will the information gained from Operation Iraqi Freedom solve the mystery of Gulf War Syndrome?

"I think we're claiming progress," responds O'Rourke. "Can I say it absolutely will? No I cannot. However, in my heart, I hope it will."

Dowtin says he is glad the government is taking the time to help soldiers in the Persian Gulf today.