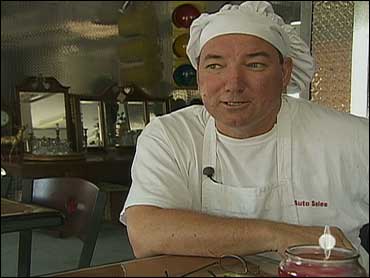 When Lynn Love felt the heat - he got into the kitchen.

CBS News correspondent Mark Strassmann reports that four months ago, he started over, hoping that cooking for people was his new winning recipe.

"They actually give me money for food," Love said. "It's cool."

Think of his name. Lynn Love. Sounds like a ... used car salesman. For 22 years, that's what Love was. Selling cars on the same Tampa street corner, always with a sense of humor.

He ran funny commercials, complete with wacky jackets. But when the economy tanked, Lynn owned a lemon: his business.

"It was no fun," Love said. "Every day I'd sit in that office, day after day after day, and literally no money would come in the door."

So he opened a different door - the one to his new mobile kitchen. He paid $20,000 for it from his dwindling savings.

"I hope we get some hungry people today," he said while doing prep work.

He's feeding people - 50 or 75 of them a day -- on the now empty lot where he once sold used Buicks and Chryslers.

The hard part was getting started.

"I didn't even know how to turn the stove on," Love said. "Literally."

But Love learned to slice, to grill, to fry. Customers came. They liked his simple cooking. The used car showman had found a new stage.

"You can play a little instruments," Love shows off while banging kitchen tools. "You can talk to yourself."

Or, talk to his regulars. Barbara Curry also bought her car from him.

"And the car guy can cook," Strassmann said.

And he's not done. This summer he'll move his restaurant indoors, to what was his car showroom.

"The cars, I don't see them in here anymore," Love said. "I see something different in here now."

It's a new kitchen, to a guy hungry for a second chance.

"Thank you for trusting me to cook for you," Love said to a customer.