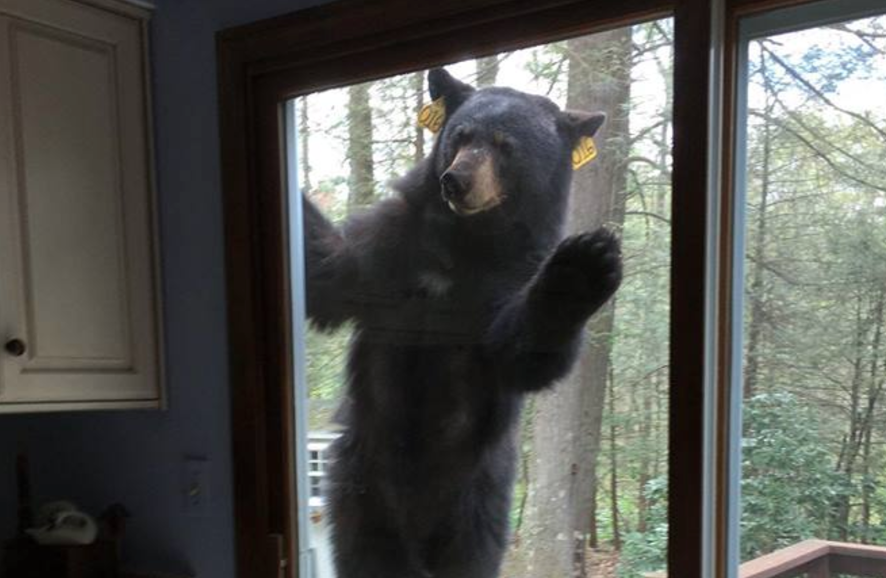 A woman was leisurely waiting for her brownies to finish baking last week when she was startled by a persistent tapping on the glass sliding door in her kitchen.

The Avon, Connecticut resident shrieked as she looked over to find a huge black bear staring back. The bear was standing on its hind legs on top of her back deck with both paws pressed up against the glass, seemingly determined to get in.

She backed away and headed across the street to find help.

"My neighbor across the street just came over in a panic," according to a 911 call obtained by CBS affiliate WFSB. "She's a little old lady, screaming that a bear got on the back porch and is slamming on her glass door."

Another neighbor, Bob Belfiore, sprinted to the woman's house to see if he could help.

While bears are not uncommon in nearby woods, this encounter was way too close for comfort. Attacks by black bears on people are very rare and most black bears can be easily scared away by loud noises, according to the Humane Society of the United States.

So Belfiore did just that. He started banging pots and pans, yelling and even pounding on the glass to scare the bear off — but it didn't work.

"We have a bear attempting to get into a house and he's not afraid of noise," Belfiore described to a 911 dispatcher.

Belfiore kept his eye on the bear as it used its claws to rip through the screen door.

"Though it looks cute on the railing, this bear was angry about not being able to get at the food," Belfiore told WFSB.

After several unsuccessful attempts to open the glass door, the bear moved on — to try another door.

"He actually left the kitchen area and went to the second set of doors off the deck," Belfiore said. "And I tried those and then went to the third set of doors into the living room and attempted to get into those."

After several more minutes passed, the black bear finally gave up. By the time Avon police arrived, the hungry animal was nowhere to be seen.

"We do get calls about bears walking in peoples' yards or crossing the street almost daily," he said. "However, those calls we would not categorize as a 'nuisance bear.'"