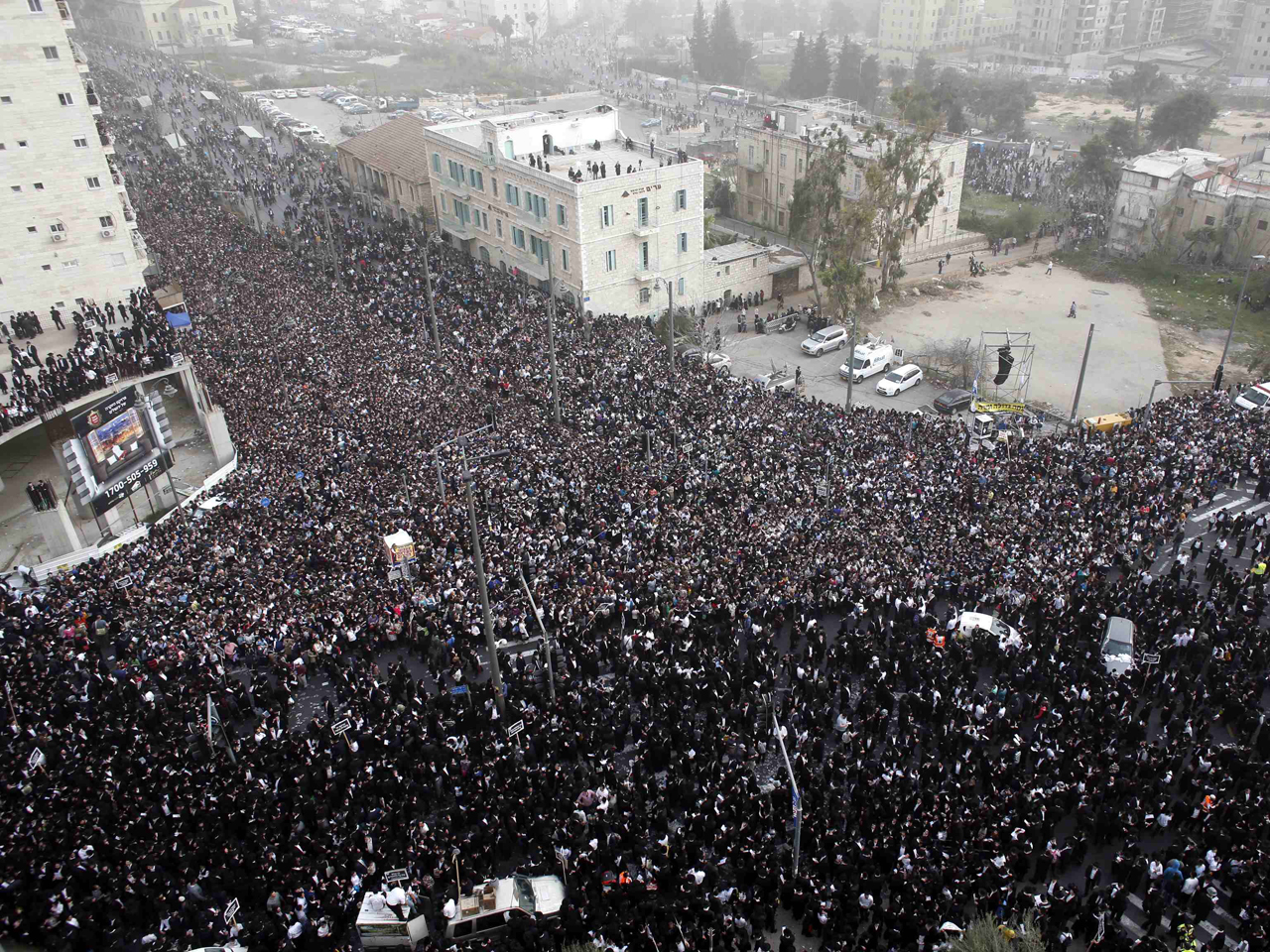 JERUSALEM - Hundreds of thousands of ultra-Orthodox Jews held a mass prayer in Jerusalem on Sunday in protest at a bill that would cut their community's military exemptions and end a tradition upheld since Israel's foundation.

Ultra-Orthodox leaders had called on their men, women and children to attend the protest against new legislation ending the wholesale army exemptions granted to seminary students, which is expected to pass in the coming weeks,

The issue is at the heart of an emotional national debate. Most Israeli Jewish men and women are called up for military service when they turn 18, but most ultra-Orthodox Jews, or "Haredim", a Hebrew term meaning 'those who tremble before God', are excused from army service.

Police said hundreds of thousands took part in the prayer. Israeli media estimated that between 250,000 to 400,000 attended.

The ultra-Orthodox demonstration paralyzed parts of Jerusalem, blocked the main entrance to the city and halted public transport as the streets around swelled with streams of men in black hats and coats, the traditional Haredi garb.

Rabbis wailed prayers over loudspeakers as the standing crowds swayed back and forth, repeating a plea to God to stop the law from being passed.

"We want to show that we are united and we want to stop a bad thing that they are trying to force us into. The army is not our way of life. It is not run by our rabbis," said 18-year-old Mordechai Seltzer.

Haredim say the study of holy scriptures is a foundation of Jewish life, that scholars have a right to devote themselves full time to the tradition, and that army service would deny them fulfillment of that religious edict.

"A CRIME TO STUDY TORAH"

"The (new) law stipulates that a person who studies Torah might end up a criminal. Are we really going to allow it to become a crime to study the Torah?" said Guy, 43.

Seventeen-year-old Israel, a seminary student who came to Israel from the United States, said his community would not give in. "There are so many of us that they cannot fight us. We are not worried. We do not want to fight them, but we are not going to do what they tell us to do," he said.

Haredim make up about 10 percent of Israel's 8 million people. They are a fast-growing and relatively poor social group. Most Haredi men are unemployed and live off state benefits, donations and their wives' often low wages.

The ultra-Orthodox community is resented by many Israelis who accuse the Haredim of burdening the economy and sponging off the state while avoiding the duties that bind others.

Changing the so-called secular-religious status quo in Israel has carried significant political risk in the past for its coalition governments, which have often relied on the support of ultra-Orthodox partners.

But now, for the first time in a decade, Israel's cabinet has no ultra-Orthodox members and main coalition partners have pressed Prime Minister Benjamin Netanyahu to enact reforms under a slogan of "sharing the burden", so an ultra-Orthodox backlash poses little danger of destabilizing the government.

A parliamentary committee has been formulating the new conscription bill for months. Though its supporters hail it as a historic step, critics say it will only be implemented in four years' time and by then a new coalition government that could overturn the law would be in power.

"They don't need us in the army. This is a cultural show of force. The ultra-Orthodox community is growing very fast and the other part of the country is worried. They want to get us into their army. Zionism is not about going into the army," said Maurice, 19, a seminary student from New York.