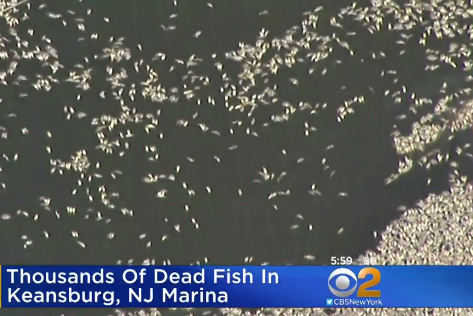 KEANSBURG, N.J.  — Hundreds of thousands of dead fish washed into a marina in Keansburg, New Jersey, following a massive fish kill in a nearby creek, CBS New York reported.

“We’re talking hundreds of thousands of fish, if not millions of fish,” said Bob Considine of the New Jersey Department of Environmental Protection.

The peanut bunker fish all died due to low oxygen levels in the marina.

“Basically, there wasn’t enough oxygen in the water to sustain them,” Considine said.

This is causing a lot of problems for boaters as a lot of engines are encased in the fish.

The dead fish have been sending a pungent smell across the area.

“It’s bad, it’s enough to gag you,” one resident said. “It smells like a sewer plant backed up and let out in the water.”

Frank Dean manages a couple of marinas in Keansburg. He said also said the combination of a million dead fish and mid-August temperatures has made for a nasty, stinky brew.

“You know if you leave fish in the garbage can for a couple of days and it’s hot out, it’s going to smell,” he said. “Well that’s the smell.”

Keansburg Mayor George Hoff said they are taking care of the fish that washed up on the beach.

“Right behind us in the creek we really can’t do much about it because it would be a massive clean-up effort, but on our beach where they washed up, our Department of Public Works is taking care of it,” Hoff said.”

The DEP said they don’t know how long the clean-up will take.