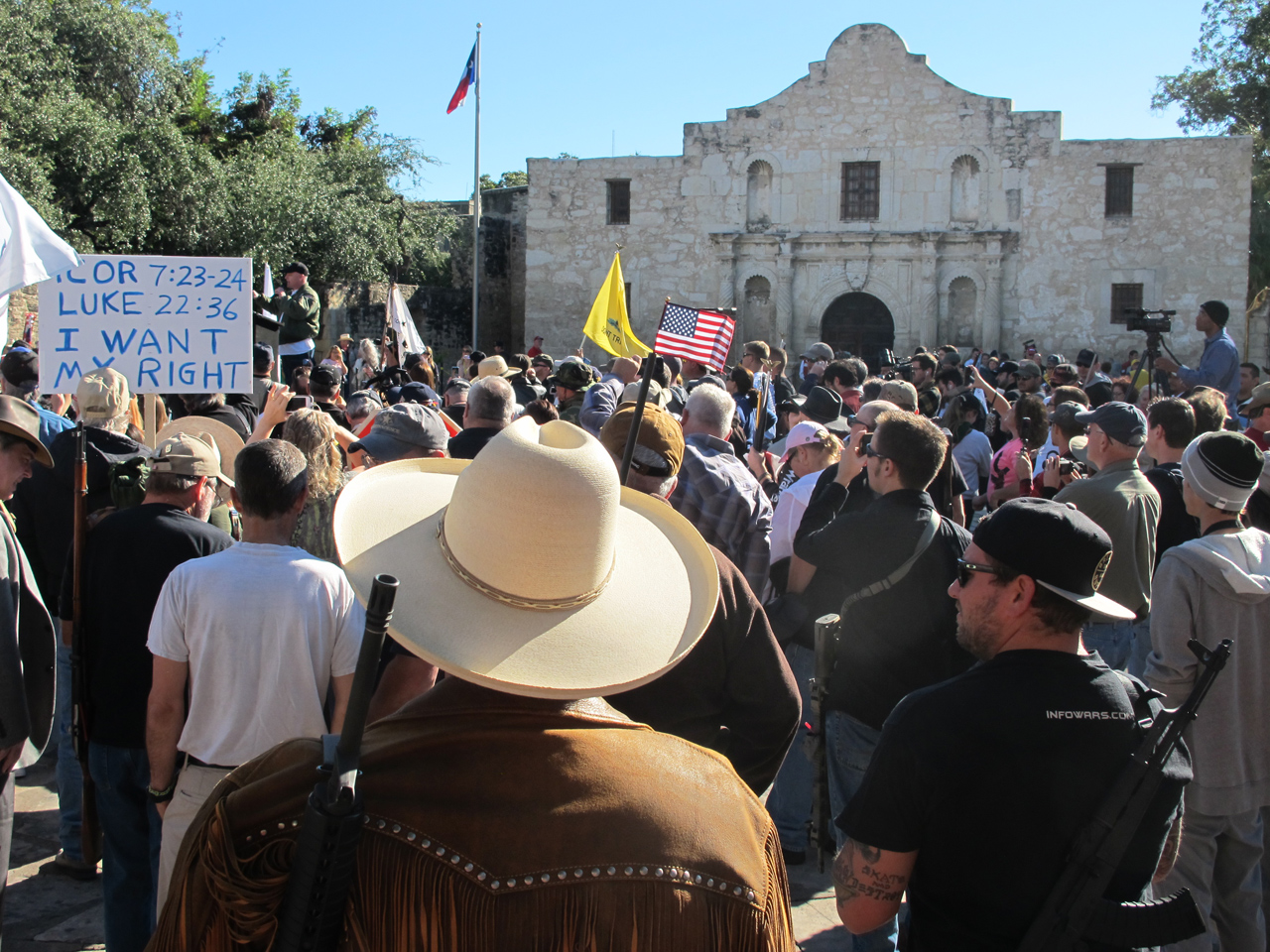 SAN ANTONIO Several hundred gun rights activists armed with rifles and shotguns rallied Saturday outside of the Alamo in a demonstration that broke a longstanding tradition of not staging such events at the enduring symbol of Texas independence.

The "Come and Take It San Antonio!" rally was intended to draw attention to a right Texans already have - to carry long arms publicly so long as they don't do it in a menacing manner. Organizers thought it necessary to offer a reminder after several open carry advocates were threatened with arrest at a Starbucks in the city two months ago. The problem remains that a local ordinance effectively limits the open carrying of firearms to police and security guards.

That ordinance was not enforced Saturday. San Antonio Police Chief William McManus mingled in the crowd that police estimated at about 300 to 400, but the larger police presence remained around the perimeter of the Alamo plaza.

"There are too many issues associated with trying to enforce every ordinance here today," McManus said. He said his priority was that people be able to exercise their constitutional rights and that everyone remain safe. Volunteers walked through the crowd placing red plastic straws in rifle chambers, a visible assurance they were not holding a round.

Rally organizers said just holding their demonstration in front of police without incident was a victory.

"(The San Antonio Police Department) is no longer going to be messing with us," said C.J. Grisham, president of Open Carry Texas, with the Alamo's famed Spanish mission behind him.

Organizers had also hoped that seeing a large peaceful gathering of armed citizens in the downtown of the country's seventh largest city would be a step toward making people comfortable with the sight. There were people of all ages in the crowd, including young children. Some waved flags that read "Come and Take It," others dressed in period costumes, but most looked like anyone else one might encounter on the street, they just happened to be carrying rifles.

Men strolling through the streets with rifles isn't an image to which Hilary Rand thinks people should have to grow accustomed.

Rand, a regional manager for Moms Demand Action for Gun Sense in America, was at a counter-demonstration about a half mile (800 meters) away. Amid hula-hoops and face painting, Rand called the gun rights rally "bullying" and said it may serve opponents' interest as well.

"If anything, they're just alerting the general public that this is something that needs to be changed," she said. "Just because you can do something doesn't mean that it's OK and that you should. And if anything they're helping to make that argument for us." She said the threat of an accidental discharge was too great to justify gun rights advocates making their point.

For the tourists who just happened upon the rally - 2.5 million visit the Alamo annually - there was initial trepidation among some.

Mark Roberts, 63, of London, Ontario, was among a group of Canadian tourists caught off guard.

"We're not used to seeing guns carried openly in Canada, so that was almost like a culture shock," Roberts said, noting that it appeared well organized. It was more unnerving for his wife.

Another member of their group, Peter Hinch, declared it "fantastic," but was dismissed by his friends as not your typical Canadian.

It didn't give Don Norwood, 49, of Little Rock, Ark., any pause. Norwood, who was visiting the Alamo with his wife and daughter, hadn't expected the demonstration, but gazing over the crowd, he said, "it's healthy, that's what America's about."

The rally proceeded peacefully without incident.

Lee Spencer White, president of the Alamo Defenders' Descendants Association, said her group considers the Alamo its family cemetery and as hallowed ground should remain free of demonstrations, which historically have been held on the adjacent plaza.

From 1905 to 2011, the Daughters of the Republic of Texas were the Alamo's custodians. But in 2011, lawmakers gave the state's General Land office control of the monument where Col. William Travis and 200 Texas defenders famously died in a siege with the Mexican army in 1836. It was Land Commissioner Jerry Patterson who approved the rally here.

"I respect the opinions of folks who say this is not the right place," Patterson said to the crowd on Saturday. "But I submit to you there's one standard we should apply to gatherings here at this sacred cradle of Texas liberty and that is whether our activity and our purpose would be supported by those men who gave it all."

Patterson, who is running for lieutenant governor, asked attendees to not block the path to the mission and to leave their rifles and signs outside when entering the chapel.